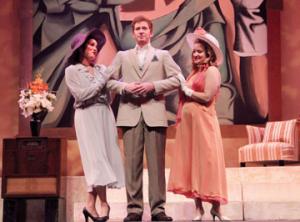 If you were bored this weekend, then you missed out. And if you’re thinking “operas aren’t my thing” sophomore Seth Pezar said, “Opera isn’t for everyone, but everyone can find their own way to enjoy it.”

The operas took place at the Mary D’Angelo Performing Arts Center and consisted of two one-act operas combined into one performance.

The first part was Mozart’s “The Impresario,” which is from the classical period of music history. The second comedy was “Gianni Schicchi” by Puccini, who composed in the romantic era.

Assistant Professor of Music Brent Weber directed the operas.Weber said, “As a producer with traditional operatic tendencies, I challenged myself by tying together these very different shows with a common thread.”

The rest of the production team was made up of a mixture of students, dance and music faculty.

The cast was a collection of Mercyhurst University students and local residents, the Rev. Shawn Clerkin and Michael Miller. The orchestra consisted of many student instrumentalists, conducted by Scott Tomlison, Ph.D.

Typically the two operas are set in Florence during the Renaissance period for Gianni Schicchi and Germany during the classical period for The Impresario, but Weber decided to set them in the late 1920s and early 1940s.

A connection was created between the two operas for better understanding for the audience.

Sophomore Chris Gaertner said, “I thought the adaptation of the opera was a welcome change. I really like how The Impresario was adapted to be performed in the 1900s; it made following the story a lot easier.”

In the first act, the impresario (producer), played by Clerkin, is about to quit the business and become a farmer in the countryside.

Mr. Eager, played by sophomore Mathew Anderson; is an aspiring opera singer who’s eager to be in a performance.

Lastly, post-bacc Lynn Dula played Buoso “Bucks” Bottino, a male character who loves to be surrounded by beautiful divas. The act was full of comical arguments supported by well-developed characters.

The second act, “Gianni Schicchi,” is a comedy focused on the mission to find Buoso Bottino’s will. The family was hoping to be the sole heir to his inheritance.

After a frantic search, they find the will and realize that his total estate was left for the divas.

As the family irately sang along about their sorrows, they decide they have to change their misfortune and “fix the will.”
Gianni Schicchi, played by juniors Eric Delagrange and Matthew Tolbert, decided to drag the body off the bed and hide it from any visitors.

Schicchi took Bottino’s place in bed, and the family planned to have him tell the lawyers to make changes to the will in their favor.

Little did they know, Schicchi decided to tell the lawyers to leave most of Bottino’s will to him. This moment had the audience laughing over the irony of the story.

The audience responded quite positively to the performance. Sophomore Kayla Rehar said, “Everyone did a magnificent job. I was sucked into the plots of the two acts and how they were connected into one story.”