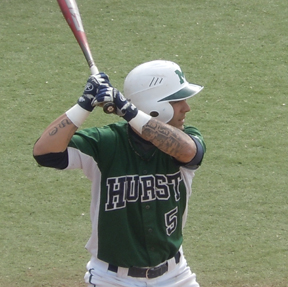 Spencer Hunt photo: Senior Ethan Santora is the new homerun champion for Mercyhurst University. He is the all-time leader in homeruns with 31. Baseball players can often be defined by physical characteristics. Cy Young award winning pitcher Tim Lincecum is known for his long hair, and All-Star outfielder Josh Hamilton is known for his tattoos.

Senior Ethan Santora already has his defining feature with full-length tattoos on both arms. The giant sleeves of art are hard to miss, and now Santora has the records to add to his resume.

On Feb. 12, Santora hit his 29th career homerun, a homerun that flew high over the Chowan University players in Murfreesboro, N.C., and into the record books of Mercyhurst University baseball.

“I actually had no idea that I was that close to breaking the record. I didn’t realize I did until I crossed home plate and everybody started hugging me and giving congratulations,” Santora said.

Santora broke the Mercyhurst baseball homerun record that had not been touched since 1997, when Laker Hall of Fame member Pat Cutshall set the record. Now with 31 career homeruns, it is clear that Santora will continue to set the bar for future players.

Santora is a humble champion, a senior communication major that will never brag or boast about his incredible achievement. To Santora, breaking the homerun record is simply a product of his dedication to the sport he loves.

Growing up in Cleveland, Ohio, Santora would often make his way to the field where his father coached baseball at Mayfield High School for 33 years.

“My dad has been a big influence in my baseball career. He used to coach, and I was always up at his practices,” Santora said.

Santora has been an avid fan for as long as he can remember. He calls Manny Ramirez his favorite player and looks up to players such as Derek Jeter and Albert Pujols.

In high school, Santora played two years of junior varsity and two years of varsity baseball, reaching the status of player of the year for Ohio in his senior year.

Breaking the homerun record was no easy task.

Junior teammate and pitcher Matthew Jimenez said, “Ethan is a hard worker in the gym, which has helped him and his ability to hit for power.”

Training and exercise have played a key role in his success.

“I like to get to the gym about five days a week with a strict weight lifting program, and I also like to take a lot of swings during the week. Baseball is a sport where repetition is really the only way to improve. So the more swings I get, the better my skills develop,” Santora said.

As an upperclassman, Santora looks forward to life after Mercyhurst.

“My plans are to continue playing baseball. If that is not an option, I am going to move back home to Cleveland and start the job hunt,” Santora said.

Although he is excited to move on from Mercyhurst, he values the strong relationship he has with his teammates.

“I am going to miss everybody in the senior class. We have been through a lot of ups and downs together, a lot of practices and we have given up a lot over the past four years to be where we are today,” Santora said.

Santora credits the coaching staff for the success of his career.

“Coach Joe Spano has helped me develop my skills over the past four years. Coach Spano has been pushing me really hard since I came in freshman year, and my swing has really developed since then,” Santora said.

Looking back on his baseball career so far, Santora said: “There has been a lot of ups and downs, a lot of hot streaks and cold streaks. A lot of extra stress came along with it, but I tried to ignore it and just play my game to help the team win.”

“I am happy that I am the one sitting at the top of this list, and hopefully there are more homeruns to be hit this season.”