Iraq would have been a mere two years away from nuclear capabilities prior to the United States invasion of 2003, according to Mercyhurst College’s recent visitor, Mahdi Obeidi.

Obeidi is an Iraqi scientist who led the effort to provide Saddam Hussein nuclear weaponry and is the author of “The Bomb In My Garden.”

“They were two years away from creating a bomb,” freshman Vince Dragone said. “That’s scary.”

That statement might not be the most shocking claim Obeidi presented during his lecture on Wednesday, Sept. 30 in Taylor Little Theatre. This lecture was directed at students majoring in intelligence studies at Mercyhurst College.

Adjunct intelligence studies faculty David Martine, who retired after more than 30 years with the CIA and FBI, invited Obeidi to Mercyhurst in order to encourage students to learn from this piece of their history and to ask themselves, “How can we do better next time?” he said.

Obeidi began his lecture by speaking about the establishment of Iraq’s Uranium Enrichment Program and ended with discussing his cooperation with American troops following the 2003 Iraq War.

Obeidi revealed how he had gathered the information and materials necessary for the creation of a nuclear bomb from the United States as well as other Allied nations such as France and Germany.

With little more than an alias and a false passport, Obeidi enrolled in the University of Virginia in 1987 and, within weeks, began to study the “designs, blueprints and critical components” of American nuclear bombs, he said. 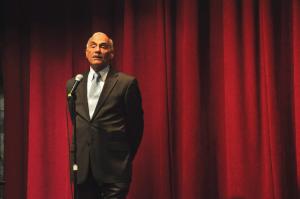 Tyler Stauffer photo
More astonishing is the fact that no one questioned Obeidi’s motives along the way.

“There are always pieces to every puzzle,” Martine said. “We missed these pieces.”

Students asked plenty of questions after the lecture.

One student asked if Obeidi ever felt afraid while working. Obeidi responded, “I was afraid of being caught by Saddam if I didn’t do it.”

Another student asked Obeidi about his motivation to create a bomb. Obeidi said he had three basic motivations: one, the drive of a scientist; two, a sense of patriotism; and three, fear. There is “always an element of fear” in the nuclear weapons business, he said.

Now free from such fear, Obeidi made no effort to disguise his true feelings about his former president. Obeidi described Saddam Hussein as a “delusioned leader who had no strategic thinking,” Obeidi said. “He was stupid.”

Obeidi informed students that “any determined nation with technical expertise” can produce a bomb. Yet he described U.S. sanctions as effective, noting that they were enough to “kill the program” in Iraq.

“It gives me a different viewpoint on why we went into Iraq,” freshman Bridget Finn said.