Man amazes all with plants in 'A Man Named Pearl' 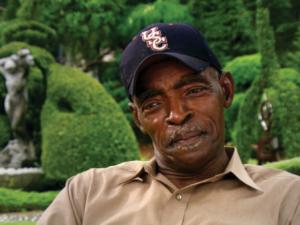 Usw.org photo: Pearl Fryar began making topiary art in his front lawn after being subject to racial discrimination.
In the intriguing film, “A Man Named Pearl,” Pearl Fryar started out as an ordinary man who faced racial prejudice.

When he moved to impoverished Lee County, S.C., he faced discrimination when buying a house. He and his wife bid on a house in an all-white neighborhood but were rejected because “black people don’t keep up their yards.”

When Fryar took a job in a canning factory in 1976, the Fryars found a house in another neighborhood—which they currently live.

Shortly after moving in, Fryar started keeping a garden. He even made it his task to win the local gardening club’s ‘gardener of the month’ award.

Knowing that only something special would set him apart to win the award, he took up his gardening shears. He began to trim the bushes and shrubs on his property into amazing geometric shapes, which were more for wonderland than a suburban neighborhood.

It didn’t take long before Fryar became obsessive about his garden. He would work all day at the canning factory and then long into the night on his topiaries.

The garden started to attract the attention first of locals and eventually of tourists. Tourists travel from around the globe to see the 3-acre lot. They can see the garden for free and are pouring money into Lee County’s starving economy.

Even though Fryar has become somewhat of a global celebrity, he has not let fame get to his head and continues to focus on his mission: to create the best garden of topiaries possible.

Produced and directed by Scott Galloway and Brent Pierson, “A Man Named Pearl” focuses on racial themes in America and the unique approaches people use to overcome them.

Tickets are free with a Mercyhurst ID.