Ending Mercyhurst University’s 10th annual Literary Festival was the unveiling of the 2012 edition of the student art magazine, Lumen.

The magazine was free to anyone who attended and featured various types of work from poetry to paintings. The actual print magazine was close to 70 pages, but the art continued with a CD-ROM included in the magazine that allows one to view even more pieces as well as live video. 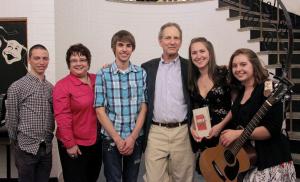 The ceremony began with co-editor of the Lumen Chrissy Mihalic introducing the magazine and thanking all those involved in helping to create it, such as her co-editor, Sarah Price.

Other editors included seniors Chelsea Schermerhorn, Irene Gallagher, Erica Gallagher and sophomore Susan Hu.
Schermerhorn will take on the role of editor-in-chief for the 2013 edition of Lumen.

“I really thought the entire program was great. Witnessing firsthand the intellectual and artistic side of the Mercyhurst student body was both inspiring and refreshing,” junior Kyle Lawton said.

Four awards were given to students whom were selected very carefully from the work submitted to the magazine. Names were removed from the pieces to make the selections fair and were selected by the English department professors.

The contest was named for Professor of English Barry McAndrew, who is legendary for his work in drama, rigorous classes and admired Shakespeare seminars.

The contest is now a permanent part of the literary tradition at Mercyhurst, thanks to the kind endowment by the McAndrew family. 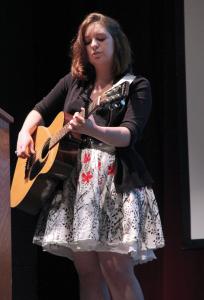 “The feeling that comes with being able to share your talent with others who appreciate it is what motivated me to submit my poetry to the Lumen. I enjoy reading the works submitted by other students, and I’m glad I was given the opportunity to show others my love for writing,” junior Laura Fiegelist said.

The winner of the 2012 P. Barry McAndrew Essay and Literary Contest was junior Jordana Beh, who received a framed certificate and a check for $250.

“The Lumen to me is a reflection of the students of Mercyhurst University. It allows for young minds to bloom and grow as the fruit of their work is carefully tended and crafted until the final product is something truly beautiful. A fine addition to our campus indeed,” junior Billy Doran said.

After the award ceremony, students were given the opportunity for an open-mic session to showcase some of their works. Some recited poetry and other showed off their musical talents with song.

“The open mic is an opportunity for anyone in the audience who wants to get up on stage and read or sing his own or someone else’s work,” Schiff said.