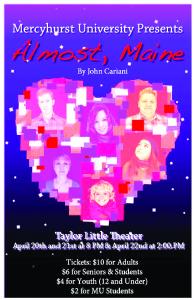 Contributed photo: “Almost, Maine” is showing Friday through Sunday, April 20 to 22. Tickets are $2 for Mercyhurst students with ID.This weekend an electric performance of John Cariani’s play “Almost, Maine” will be performed in Taylor Little Theatre.

This show is a riveting showcase of nine vignettes about love that take place in the fictional, yet emotionally tangible town of Almost, Maine. The script entices the actors to portray the actions and feelings of new, lost and rekindled love in the cold winter of the northern United States.

The performance consists of two acts, each with four vignettes, and with a bizarre scene that starts as a prologue and continues through the interlogue and epilogue.

The prologue starts with Pete and Ginette, who sit on a bench beneath the vast night sky, and although they’re sitting next to each other, they’re thousands of miles apart.

Scene 1 is titled “Her Heart” and begins with a young woman named Glory, who isn’t native to the little town of Almost, but she sure does find herself oddly at home with a repairman Easton.

The two strangers then discover what it means to mend broken hearts and become more than either of them could have anticipated.

The next vignette is a story of love lost and found. Jimmy is a regular guy who sees his ex-girlfriend, Sandrine, at their local hang out.

After a plethora of awkward moments and uncertainty, it becomes apparent that fate works in a quirky way for Jimmy. Sometimes, even mistakes can be reversed.

Scene 3 involves Marvalyn and Steve who both are lacking emotion in their lives for different reasons. After a freaky turn of events, they find out that love is a magical thing and can be found anywhere if you try hard enough.
Marvalyn is afraid to love, and Steve isn’t sure he’s able to. Together, they help sort out each other’s love lives.

The last vignette of act one uses “love” as something you can physically give a person, and Gayle wants all hers back from Lendall.

It appears that Lendall gave much more love than Gayle, but size isn’t everything. The love Lendall gives to Gayle is proof that sometimes big things come in small packages.

In the beginning of Act 2, there is an interlogue, where Pete from the prologue is still looking off into the distance waiting for Ginette to return.

The lights go up in the first scene on Randy and Chad, two buddies who just got back from a horrible night of failed dates. They soon figure out through a rough turn of events that sometimes all you need is your best friend, and it doesn’t always come along in a way you expect.

Scene 2 focuses on a couple, Phil and Marci, who had just got done ice skating in their old hang out spot when they realize their marriage has been put on the back burner for quite a few years.

Anniversaries are forgotten, planets are mistaken for stars and the couple realizes that maybe everything isn’t what it used to be.

Scene 3 opens on Hope, a girl in her mid-20s searching for the house of the boy she loves but hasn’t seen in years.

After knocking on the door, she realizes that the man who now lives there isn’t who she expected and that her love may be lost for good.

In the final scene, Rhonda seems to have the romantic situation between her and her best friend, Dave, under control.

Rhonda has gotten through life by being tough, and Dave sees a need to break this trend. This last scene is proof that a person can find love even in the most unlikely place.