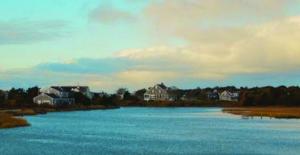 pac.mercyhurst.edu Photo: Living Downstream tells the story of a woman who is not only dealing with her own bouts with cancer, but also helping others in her situation.
“Living Downstream” is this week’s Maria J. Langer series film at the Mary D’Angelo Performing Arts Center (PAC).

The film is Based on Sandra Steingraber’s book “Living Downstream: An Ecologist’s Personal Investigation of Cancer and the Environment” where Steingraber documents one year in her life as she travels across North America on a mission to break the silence about cancer and its environmental links.

Steingraber’s book takes a different view on cancer, and she presents it as a human rights issue. The book was the first of its kind to bring together data on toxic releases with data from U.S. cancer registries.

“Living Downstream” was adapted for film in 2010 by The People’s Picture Company of Toronto. Described as an eloquent and cinematic documentary, it takes viewers through two intimate journeys with Steingraber.

The first being her personal struggle with cancer and the second being her public attempt to bring attention to the human rights issue of cancer prevention.

Another issue is that some of the invisible toxins migrate to some of the most beautiful places in North America, which are the same chemicals Steingraber is fighting against.

The film reveals how those chemicals enter our bodies and once inside, scientists believe they may be working to cause cancer. Making cameo appearances in the film are several highly-respected experts in toxicology and cancer research.

They emphasize the importance of atrazine, one of the most common herbicides in the world and polychlorinated biphenyls, industrial compounds. Their discoveries stress the importance of the tie between a healthy environment and human health, which is one of the main points in Steingraber’s book.

The film received nothing but praise from critics. Ann Hornday of The Washington Post says, “Steingraber’s scientific cool and unflagging sense of mission make for an arresting portrait of a self-styled modern-day Rachel Carson.”
Ali Gadbow of Missoula Independent said it’s “a convincing and necessary documentary.

“It’s also, despite its daunting subject matter, a movie you’ll want to watch … A few pitch-perfect moments provide all the emotional force you would expect from a ‘cancer movie,’ minus the unpleasant tang of emotional manipulation.”

Steingraber describes her journey with cancer as a walk upstream, the beginning of a completely unplanned journey, claiming we do not have to put a happy face on cancer; it is a serial killer.

Her personal struggle in combination with her scientific exploration is a powerful reminder of the intimate connection between the health of our bodies and the health of our environment. The film will be shown at the PAC on Wednesday, April 25, at 2:15 and 7:15 p.m. Tickets are $6 for adults, $5 for seniors and free for Mercyhurst students.