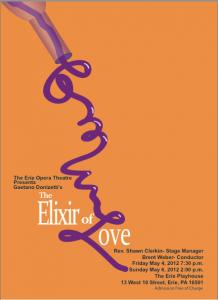 Contributed photo: The Elixir of Love will be performed at the Erie Playhouse and is free and open to the public.

This weekend the Erie Opera Theatre will be putting on a production of “The Elixir of Love” by Gaetano Donizetti.
The performances will be located at the Erie Playhouse and will feature some very talented Mercyhurst alumni, and will be under the direction of Mercyhurst Professor Brent Weber.

Sergeant Belcore appears with his regiment and immediately proposes marriage to Adina in front of the town.
A traveling salesman, Dulcamara arrives, selling his bottled cure-all to the townspeople. Nemorino innocently asks Dulcamara if he has anything resembling a love potion. Dulcamara sells it to him at a price matching the contents of Nemorino’s pockets.

Unknown to Nemorino, the bottle contains only wine. Nemorino drinks it, feeling its effects immediately. Emboldened by the “elixir” Nemorino encounters Adina, and although her wedding with the Sergeant has been scheduled for six days later, Nemorino is certain he’ll win Adina tomorrow with the help of the elixir.

This upsets Adina, and given the news that the Sergeant must leave the next day, they decide to marry immediately. Nemorino panics, and calls for the doctor to come to his aid.At the wedding, the notary arrives to make the marriage official.

Everyone goes inside to sign the wedding contract, but Dulcamara stays outside, helping himself to food and drink.
Nemorino appears and begs him for more elixir that will work immediately. The doctor refuses and goes into the house.

The sergeant appears outside and asks about Nemorino’s dejection.

When Nemorino says he has no money, Belcore suggests that if he joins the army he’ll be paid immediately. Nemorino then signs up in return for the cash.

It is later learned that Nemorino has inherited a large sum of money for his deceased uncle. Nemorino has no idea this has happened, so when the town’s girls crowd him with hellos this is proof to Nemorino that the new dose of the elixir has worked.

Adina hears what has happened from Dulcamara, and she falls for Nemorino.Nemorino appears alone, convinced that Adina loves him. She enters, asking him why he has chosen to join the army. When Nemorino says he’s seeking a better life, Adina responds by telling him she has purchased his military contract from Sergeant Belcore.
He is free now, but She says, however, that if he stays, he will no longer be sad.

Nemorino then believes that he is rejected and the doctor has taken him for a fool, and must die as a soldier anyway.

Adina confesses that she loves him, and Nemorino is ecstatic. The Sergeant claims that there are other women in the world, and he will go find one.

The doctor then follows, telling the Sergeant he has an “elixir” to help his conquest.