The House that Hurst Built gives back to community

The House that Hurst Built is a blitz building project taken on by Mercyhurst University and Habitat for Humanity. The four-week build began Monday, Aug. 27, and continues until Saturday, Sept. 22, of homecoming weekend.

The House that Hurst Built involves Mercyhurst faculty and students from every major, club and athletic team from the Main campus as well as North East. In order to complete the project on time, volunteers have been excellent in turning out and working through weather conditions such as rain on the first day of the build. 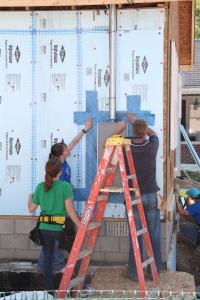 Sami Rapp photo: Students work together on the outside of the house.

After becoming a university in early 2012, Mercyhurst decided to take on a project that would prove fitting to one of the University’s core values — service.

“The House that Hurst Built is a great way for Mercyhurst to give back to the community in a way that is consistent with our mission and values of service and compassion,” Associate Vice President for Enrollment Management Christopher Coons said.

To fulfill this mission, the University has teamed with Habitat for Humanity to build a home for Rosemary Anderson and her family. Anderson is a Liberian refugee who fled her war-torn country with her seven children.

She spent 16 years in a Ghana refugee camp before coming to the United States in 2006. While at the camp, Anderson learned valuable construction skills which she uses in her job with the maintenance department of the Erie Housing Authority. In 2011, Anderson became a U.S. citizen, and eventually qualified for the House that Hurst Built project.

The purpose of the House that Hurst Built is three fold. The first goal is a community goal, bonding students and faculty members as they put in hours of labor toward the completion of the project.

The second goal is a community need, providing a home for Anderson and her family.

The final goal is a service goal: by Mercyhurst University giving back to the community in a mutually beneficial arrangement.

“I truly think this project is what our school is all about,” said junior and member of the Habitat for Humanity Board Amber Penna. “Being able to see the progress, from ground level to a completed house, is so fulfilling. To provide that joy to the family is unbelievable.”

Director of Service Learning, Colin Hurley expects the project to meet its deadline. Even so, there will likely be little things, such as painting, that Anderson will complete herself as part of the “sweat equity,” a required 300 hours of work the family must complete in order to qualify and receive their home.

Hurley gave his thoughts on the faculty and staff’s support: “I am overwhelmed by Mercyhurst’s support and commitment to the project, and thrilled that it is approaching completion.”

Work on the House that Hurst Built is ongoing. Anderson and her family will be presented with the key to their house Saturday, Sept. 22.

For more information about the project visit here or email hursthouse@mercyhurst.edu.