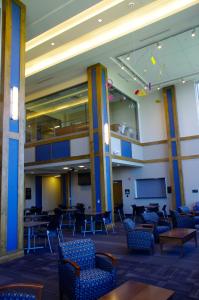 The Board of Trustees, faculty and other members of the Mercyhurst community, as well as Erie public figures, celebrated the inauguration of the Center for Academic Engagement (CAE).

The ceremony was Wednesday, Aug. 15, and was attended by approximately 350 guests, including state Sen. Jane Earll and Mayor Joseph Sinnott. Bishop Donald Trautman blessed the building and the ribbon was cut, opening the $10.5 million CAE to the community.

David Livingston, Ph.D., vice president for advancement, said they were able to use the entire building in terms of its design and take full advantage of its functionality.

Livingston said the CAE is complete except for the board room on the third floor, which is waiting on furniture that is being designed by a local woodworker. The furniture will be installed Saturday, Sept. 15, in preparation for the first board meeting in its new location Friday, Sept. 28.

In addition, some minor networking features are still being worked on behind the scenes.

For the long term, the board has not yet decided to make any additions to the building.

“You need to let it be lived in for a while,” Livingston said. “As students and faculty use the building, they notice what is missing.”

With the Intelligence, Hospitality Management and Applied Politics departments moving into the CAE, a few changes in other departments’ locations have occurred prior to the beginning of the academic year.

Interior design moved from the Briggs Annex to the building on Wayne Street, with the psychology department taking its place in Briggs. Additionally, public health relocated to the Audrey Hirt Academic Center.

Student reaction is mixed, but a good number of the Intelligence Studies majors are very pleased with the result.

Freshman Michael Murphy thinks that the CAE is “a very innovative building with a modern setting and a perfect location for the intelligence department.”

Sophomore Julie Brooks is indifferent to the change.

“I thought the whole point of having a new building was to have more computer labs, but they left us with two again.”

As students, faculty and staff settle in to the CAE, finishing touches will continue to take place on the building.