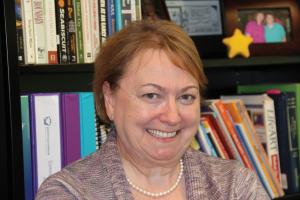 Sami Rapp photo: Jane Blystone awarded the National Scholastic Press Association Pioneer Award.Commonly she is known as the Director of the Graduate Program, but here in the world of journalism, Jane Blystone is known as an extremely accomplished, award- winning teacher and “pioneer.”

Blystone has been awarded the National Scholastic Press Association Pioneer Award, which is the highest honor of the organization and recognizes contributions to scholasticism. Blystone and four other national journalism leaders will receive the award at the JEA/NSPA national convention this November in San Antonio, Texas.

This is not Blystone’s first national award: She has also been received awards from the Columbia Scholastic Press Association, the Journalism Education Association and the National Council of Teachers of English. To Blystone, however, these are the least of her greatest accomplishments.

“I think the greatest accomplishments that I have had as a journalism educator have been helping students find their life’s passion in journalism,” said Blystone.

“When I read a local paper and know that one of my former editors is now the editor of a professional paper, that is inspiring, just as when I see one of my former students is broadcasting a story that makes national news.”

Journalism ensures that the people can express their First Amendment rights to freedom of speech and freedom of the press.

As Blystone put it, “journalism is the frontline of history is one of the pillars of democracy.”

Blystone’s clear passion for journalism has been an evolution throughout the years and started at quite an early age when her eighth grade teacher advised her to join the school newspaper. On top of that, she was a news carrier for the Erie Morning News, and was “addicted to reading it every day before school.”

Blystone went on to earn advanced degrees in English as well as a K-12 principal’s certification. She is a Master Journalism Educator through the Journalism Education Association and serves as the Director for the Northeast region.

Before her career began here at Mercyhurst, Blystone taught English and Journalism at North East High School in North East, Pa., before retiring in 2008. In 2009, she became a member of the North East School Board, never losing her continual devotion to students and the learning process.

Blystone’s advice for students interested in writing and journalism is to, “Read, read, read and write, write, write.”

She insists that one must constantly know what is going on both locally and globally in order to understand and interpret events, as well as “understand the power of story in decision-making in a global society.”

When asked why she was so passionate about journalism, Blystone recalled when her students live-streamed media stories on 9/11 for the first time.

“Journalists were the ones who told us the moment-by-moment details of the terrorism we were facing,” said Blystone. “Never in the past did we know so much so quickly. That is what journalism is –- the power of the people. When people have no power, there is no democracy.”