After becoming a university last January, the Mercyhurst college community embraced the new title, and the class of 2012 became the first class to graduate from Mercyhurst University.

Toward the end of last academic year, the bookstore began printing university merchandise, along with the campus offices printing the new university letterhead. Little did we know that a full-fledged university-branding campaign would soon take the campus by storm.

Looking past everyday life, branding has made some changes for the merchandise sold at the bookstore, the cosmetic aspect of student IDs from the OneCard Office, and has the potential to affect college nights at local bars. 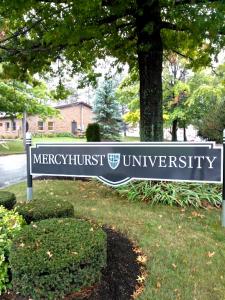 Dan Cullen, the general manager of the campus bookstore said, “The new logo cannot be printed on certain colors because it just doesn’t make sense when you see the logo and it does not allow for proper branding.”

Therefore, students should not expect to see the university logo printed on neon, tie-dye, and similar colors because of the clashing colors.

“The biggest issue we have as far as production goes is with placement, especially zippers and embroidery,” he said.

Cullen also said that the distressed look that former merchandise featured cannot be used with the new logo “because it isn’t what the school wants and just won’t transfer well.”

There is no difference in production costs, between the university merchandise and former college merchandise. It is all a matter of determining what does or does not look good.

Along with managing the merchandise the school has permission to sell and change the ID cards from saying college to university. However, the changes in identification cards have caused dissatisfaction among students who received an acceptance letter and ID card from Mercyhurst College.

Junior Chris Gaertner said, “I think that the option to get a new university ID card for free should be given, instead of the usual game of ‘let’s see how much money we can take from our students today’ that the school usually plays.”

Gaertner is referring to the $15 charge for students to get a new university ID card.

According to John Patterson, director of the OneCard office, “there is a charge because this is the same fee as a damaged or lost ID card.”

As for the new layout of the university ID cards, it features a largely printed ‘Mercyhurst University’ label at the bottom.

Patterson said, “The school told me what was required of the cards, but it was ultimately my decision for the layout. The Public Relations Department and designer of the card, Steve Perkins, made sure it was appropriate, and we came up with the card.”

Vice President for Advancement David Livingston, Ph.D., explained that branding the university is an important step in their “competitive marketplace of attracting new students.”

“The move to becoming a university is a unique event in the life of an institution as it can happen only once. This is an opportunity to reinvigorate the Mercyhurst name in the community and the region,” said Livingston.

“Seeing the words Mercyhurst College seemed normal to everyone for the past 84 years. Most of what is seen with Mercyhurst University is the same that was done last fall, but it had Mercyhurst College on it and no one noticed that, because that was normal. This is new and so it is noticeable,” he said.

Livingston added that they are continuing to change signs and other materials to read Mercyhurst University.

“It is who we are now and as such I think we should embrace it as much as possible,” sophomore Andrew Shepard said.

Campus might be missing neon t-shirts sporting the new logo and upperclassman may have a fee to “upgrade” their card to say ‘Mercyhurst University,’ but so far the branding of the university status has been well received from both the campus and Erie communities.