For those who have the late night munchies, the Culinary Cab is here to your rescue, serving food around campus.

Parkhurst got the idea after seeing food trucks on other campuses and the Food Network. A truck was purchased and over the summer they got to work testing and improving their late night snacks. 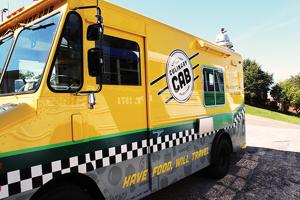 Manager Robert Scott said, “How the student’s perceive food…what they want and what they like” is how items will switch up.

There are many ideas in the works and they want to make it accessible for everyone. Similar to the Laker and Egan, suggestion cards will most likely become a way of communicating your thoughts and ideas.

The Culinary Cab doesn’t just provide food to the student body, but it also creates a place to meet fellow students. Cloud wants to make the Culinary Cab a place where friends can socialize and others can come to meet someone they may not have had the pleasure of meeting before.

Cloud said, “[The Culinary Cab] is not just a food truck, it’s a novelty. I’m just happy to be apart of it.”

Satisfying students is the key goal of the Culinary Cab and so far it has had a positive impact.

The food is something different and it is convenient for those living on Briggs and Lewis. Parkhurst hopes this makes life easier for students. The Culinary Cab takes dining dollars, money, and credit cards, but they do not take boards from the meal plan.

As for other food ideas, Fielding Cloud, supervisor of the Culinary Cab said, “The students will dictate.”
Junior Caitlin O’Neil said, “The waking tacos are delicious and they have convenient hours.”

“It’s definitely one of the best ideas they’ve ever had,” sophomore Damian Walker said.

As the seasons are changing, there has been talk of hot apple cider and hot chocolate coming soon for the cold weather. Cloud also had thoughts about using the Culinary Cab to pass out treats to kids on Halloween and mentioned that big things would hopefully be happening on that day for students.

Another big holiday for the Culinary Cab will be St. Patrick’s Day.

“There are endless possibilities with the truck,” Scott said.

The team would like to extend business outside of campus. They have already begun going to Mercyhurst North East on Tuesday nights, and would like to go to festivals over the summer. Two possible events to join are Celebrate Erie and Presque Isle Days.

The Culinary Cab runs Thursday through Saturday from 11 p.m. to 2 a.m. each week on campus.