With a win over Seton Hill last week, women’s volleyball head coach Ryan Patton became the all-time wins leader in volleyball at Mercyhurst University. Patton has an impressive 120 wins over his eight-year reign as head coach, marking his place in Mercyhurst history.

For senior Amanda Balasko, Coach Patton has undoubtedly played a major role in shaping her volleyball career over the past four seasons. 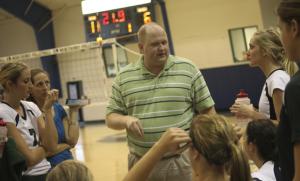 “Coach is very intelligent, he definitely knows the game,” said Balasko. “He develops smart, but hard, drills for practice to prepare us for our next opponent.”

Coach Patton took over the women’s program after coaching both men’s and women’s volleyball at Mercyhurst. After the men’s volleyball program was cut a few years ago, Coach Patton focused all of his attention and efforts solely on the remaining women’s squad.

“I needed more than 100 percent to coach two teams,” said Patton. “My 100 percent couldn’t be 100 percent. Once I was only coaching the women’s team, I was able to increase their ability and give them more focus.”
Patton attributes a major portion of his success to his wife and assistant coach, Jenell.

“She handles all of the day-to-day recruiting, among other things, and without her, we wouldn’t have the athletes we have,” Patton said.
The Lakers have been on a roll this season with a 13-4 overall record. Women’s volleyball will be home Oct. 9 vs. Gannon at 7:05 p.m. at the Mercyhurst Athletic Center (MAC).