This year there were a record number of nominations, for Homecoming King and Queen submitted to MSG, which says a lot about the senior class.

Despite the weather, Homecoming proved to be a success with the win of the football game. During halftime Adam Ferrari and Kaleigh Hubert were announced as Homecoming King and Queen. 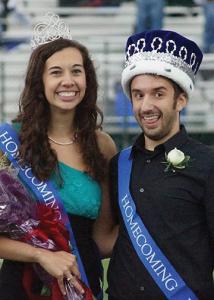 What is your major?
Music Education

Where are you from?
Ridgway, Pa.

What activities are you involved with on or off campus?
I’m a resident assistant, an ambassador and I also am very heavily committed to anything and everything revolving within and around the D’Angelo Department of Music here. It is a huge part of who I am and so much of my time has been and is invested in it.

How do you feel about the nomination?
Well I can’t say I’m not happy. It was a great feeling… and hey, I have a crown. It’ll be an awesome memory to hang on to.

What is your favorite thing about Mercyhurst?
Well, it’s really hard to just pick one thing. It may sound kind of generic… but I really do love that I can get all the major perks of a university here, but in a small, intimate atmosphere where the professors know all of his or her students’ names.

What is an interesting fact about you?
Well, I am an opera singer. It’s what I want to do for the rest of my life and I’m doing my best to get there. I also work at Gap.

What is your major?
Biology and Psychology

Where are you from?
Erie, Pa.

What activities are you involved with on or off campus?
I am president of Honors Council, an ambassador Pledge Chair and a Laker Leader, along with a number of other clubs on campus such as Tri-Beta, Student Alumni Association and Habitat for Humanity.

How do you feel about the nomination?
I am absolutely thrilled to have been chosen as Homecoming Queen. I was honored just to be on the court and was so surprised when I saw the white balloon and heard my name announced on the loud speaker. Even though it was a bit rainy, it was definitely an experience I’ll never forget.

What is your favorite thing about Mercyhurst?
I have met some of my best friends while at Mercyhurst, and the friendly atmosphere which occurs as soon as you pass through the gates has made my experience that much better.

What is an interesting fact about you?
I guess I have two interesting facts. First, I have been dancing since I was four years old and continue to do it as often as I can now that I’m in college. My other fun fact is my younger sister, Meaghan, is a freshman here, and I also have two cousins that go here as well. I really like having family so close.

Congratulations to the 2012 Homecoming King and Queen.