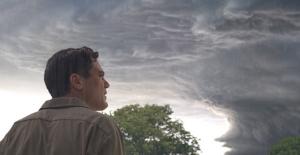 Through a series of visions, Curtis begins to think that he has developed schizophrenia. Curtis has premonitions of a large storm coming their way. In order to keep his family safe, Curtis has the idea to build a storm shelter in his back yard.

Tyler Davidson, the producer of “Take Shelter” will be coming to Mercyhurst this Friday. He will be speaking before the 7:15 showing, and then doing a Q&A after in the Taylor Little Theater. The movie is being shown as part of the Langer Film Series. Davidson has been making movies for over 14 years. When Davidson started working in the film business, he lived in Los Angeles with his wife.

The couple felt that raising a family in northeastern Ohio would be more practical than in southern L.A. Fortunately, he is able to make films in his hometown of Chagrin Falls, Ohio. The father of two is able to do what he loves while being around his family and friends. Without Davidson, “Take Shelter” could not have been made. The role of a film producer is to get the project going. They must raise funds and gather a cast and crew for the film.

As the producer, Davidson was largely responsible for gathering funding for the movie.Davidson and crew filmed “Take Shelter” around Grafton, Chardon, and Elyria, Ohio in the summer of 2010. It went to several film festivals including Sundance and Cannes. The movie was also rumored to be nominated at the Academy Awards, but unfortunately did not make the cut.

“Take Shelter” is a psychological thriller that keeps you on the edge of your seat. It won’t disappoint and is a must see.