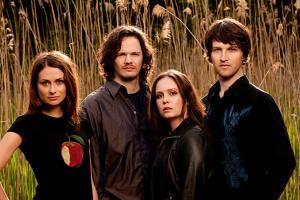 VoxareQuartet.com: The Voxare String Quartet is one of the fastest rising groups of our time, performing in venues all over the world.

The Voxare Quartet gave a thrilling display of technical skill and musicianship for the audience in the Performing Arts Center, Wednesday night. “The group jumps on its music with all fours and makes the tussle worth hearing,” said the Washington Post in February earlier this year.

For this performance, the quartet combined their skill with a silent film called “Man with a Movie Camera.” Originally filmed in 1928, the silent film features no actors, nor a plot line.

Those who found themselves caught in the sights of this candid video camera were ordinary Ukrainian citizens who were going about their day. The avant-garde style highlights that this film can go anywhere from a woman giving birth to beach-goers on a sunny day. Although the documentary was completely silent, the perfect accompaniment of Voxare gave the illusion that what was played was the original score.

The movements and selections that matched up so perfectly with what was happening on the screen must have taken hours upon hours of editing and re-editing.

Since its formation in 2008, the Voxare String Quartet has received constant praise over its attention to detail, passion, technical skill and its inventive programming. Voxare accompanied the silent film with a level of virtuosity that is rarely seen on even the most prestigious stages today. At different moments in the film, Voxare coordinated motifs that helped tie the whole production together. For instance, whenever the film depicted the public riding a train or participating in any form of travel, the quartet repeated a passage that included a close harmony that gave the listener a sense of travel.

Although performing around the country in numerous universities and concert halls, Voxare is the prestigious quartet-in-residence at New York’s Bargemusic.

The quartet studied repertoire with the founder of the Juilliard String Quartet, Robert Mann, along with the Tokyo, Orion and Kronos Quartets. Unlike many quartets that simply perform standard repertoire, Voxare encourages the performance of and interest in contemporary music, including works with Pulitzer Prize winning composers Ned Rorem and David Del Tredici.

The Quartet consists of four players – two violins, a viola and a cello. Emily Ondracek, violin, is a Chicago native and started playing violin at age five. At 16, Ondracek had her very first solo opportunity with the Chicago Symphony Orchestra. Ondracek received her master’s from The Juilliard School and is currently a doctoral candidate at Columbia University. She performs on a Parisian violin made in 1815.

Galina Zhdanova, also a violinist began studying at the age of five. When she turned 15. In 2004, she was appointed assistant concertmaster of the Bayreuth Festival Youth Symphony Orchestra. A graduate of St. Petersburg, Zhdanova plays with Josh Groban, Sarah Brightman, the Trans-Siberian Orchestra and Steven Tyler of Aerosmith. Erik Peterson plays viola for Voxare and is originally from Chicago. He has played with the Cleveland, Milwaukee and New World Orchestra. Peterson has collaborated with the members of Juilliard, Brentano and the Cleveland Orchestra.

Last but not least is Adrian Daurov on cello. Born in St. Petersburg, Russia, Daurov was awarded first prize at the international music competition in Bulgaria. A graduate of Juilliard, he has recently performed the world premiere of “The Epistle” with the Russian Chamber Chorus of New York.The Voxare Quartet gave a stunning performance and left the audience begging for more.