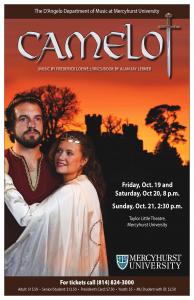 The timeless tale of King Arthur, Lancelot and the knights of the round table will come alive on the stage of Taylor Little Theatre at Mercyhurst University in Alan Jay Lerner’s “Camelot” for three performances Oct. 19-21. “Camelot” tells the story of King Arthur and Queen Guenevere trying to rid the land of senseless fighting, and establish chivalry along with the idea of “might for right.” With Merlin and Guenevere by his side, King Arthur creates a kingdom known for peace and sensibility.

This wonderful production features student actors accompanied with faculty and alumni who have worked to bring the timeless classic of “Camelot” to life. Evening performances are Friday and Saturday, Oct. 19-20, at 8 p.m. with a 2:30 p.m. matinée on Sunday, Oct. 21. Produced by D’Angelo Department of Music Chair Louisa Jonason, “Camelot” is directed by Rebecka Kerr with Mathew Anderson, a junior voice major, as her Assistant Director/Production Manager.

The show begins with King Arthur, played by senior Matthew Tolbert, perched in a tree. The king is terrified of his impending marriage with an unknown queen. Soon after, Merlin, played by Mercyhurst faculty alumnus, Barry McAndrew, comes and coaxes him out of the tree, reminding him of his Kingly duties. Not knowing who the king is, Queen Guenevere, played by senior Kirstan Orgel, then appears, begging for him to take her away from Camelot. The king soon charms her and she falls instantly in love with Arthur and Camelot itself.

Five years later, the happily married king and queen discuss ideas such as chivalry and “might for right” instead of “might is right.” After much debate and discussion, they formulate the idea of a round table where knights would gather and discuss politics and hold trials. A new age is dawning – an age of reason and prosperity.

Soon after, a young French knight named Lancelot, played by sophomore Dillon Shidemantle, comes seeking to become a part of this round table. At first sight, Lancelot disgusts Queen Guenevere, but then fate takes the wheel and the two fall helplessly in love.

Five years later, a young yet bitter man appears in the castle of Camelot. He introduces himself as Mordred, played by junior Chris Gaertner, the illegitimate son of Arthur. In a quest for blood and vengeance, Mordred leads Knights in an uprising against the round table. What then ensues will test the bounds of chivalry and the very Kingdom itself.

The score of “Camelot” is as equally enchanting as the classic story line. Conducted by Mercyhurst alumnus Andrew Ferguson, a few musical favorites of this production include “C’est Moi,” “Camelot,” “If Ever I Would Leave You,” “The Lusty Month of May” and “Fie on Goodness.”

Tickets for “Camelot” are $15.50 for adults, $12.50 for seniors and students, $5 for youths (under 12) and $2.50 for Mercyhurst students with ID. They can be purchased at the door or in advance at the Mary D’Angelo Performing Arts Center (PAC) box office. For ticket information, call the PAC at 824-3000.
Students are encouraged to come enjoy “Camelot,” Mercyhurst Theatre Program’s first student performance this year.