Haunting at the 'Hurst 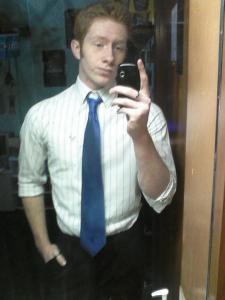 Staff photo: Mat Anderson took a picture in room 222 of McAuley Hall in 2010 and a mysterious face appeared over his right shoulder. Anderson believes it was a Mercyhurst spirit.

It’s that time of year for scary movies, ghosts and haunted houses. At Mercyhurst we seem to have our own haunted house all year long. Everyone knows of the rumors of Mercyhurst being haunted, contributed by the various deaths and strange occurrences that have happened throughout the years on campus.

Just walking around Old Main and Egan throughout the day can seem a little creepy with the statues that seem to be staring you straight in the eye and the elevator older than your parents in Egan. Now imagine staying in these buildings until the next morning. The Merciad staff took on the frightening task and stayed in the connecting buildings until 3 a.m. to observe if anything eerie might occur.

The night started off after a tedious assembly of the latest issue of the Merciad around 11 p.m. We all met up in the main lobby of Old Main, awaiting for the night to take off. The decision was then made to split up in groups and continue our adventure.

Walking through the halls of Old Main we ran into a cleaning lady who gave her insight on the matter of whether the campus was haunted.

“No, I haven’t seen anything spooky in this building, but those that clean in Baldwin have told me they have there,” Denise Snyder said.

As we continued our adventure we found some very creepy locations in the buildings. Headed to the lowest level of Egan we found a creepy, tiny door. It was unknown what was on the other side, but by the looks of it, I didn’t really want to know. 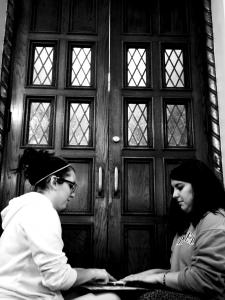 Staff photo: Cagle and Handerhan talk to the spirits, using a ouija board, outside the Mercyhurst Christ the King Chapel.

Near the mysterious door we came across a room that resembled a scene of a slaughter film. Water was dripping and there was a filthy staircase that led to another unknown room. We peered up most of the stairs, but decided going much further was not an option. The situation was getting a little too creepy for our liking.

Soon we reunited with the rest of the crew, who had not experienced anything too spooky, just also shared some creepy atmospheres. Then it was time for Ouija to begin.
The best reading occurred in the girl’s bathroom in Egan. Sports editor Joe Chiodo and entertainment editor Mat Anderson volunteered to see what ghosts they could conjure.

As the game begins you ask the spirit if they are from the sun or the moon, meaning if they are a good or bad spirit. The spirit let us know it was from the sun, meaning it was a good spirit, and that it was a female. The question of her name was then asked. We all stared in awe as the triangular plastic piece spelled out N-O-R-A.

Things were starting to feel real as the propeller fan went crazy in the corner of the bathroom. Nora then revealed she had died in 1946 and still remained on campus for revenge. She told us she sought out revenge from her brother Duncan who had killed someone. That was enough information for us, as we then wished the spirit goodbye.

Our experience in Old Main and Egan was a very creepy one just as many other students have experienced throughout their time as a student on campus.

Sophomore Michael Starry recalls the time he became a believer of the Hurst being haunted.

“I was walking into Old Main and heard the piano playing, but didn’t see anyone playing it,” Starry said.

Senior Abby Robinson shared a similar story when she was participating in phone-a-thon calling.

“As we were all in the room for the phone-a-thon a gust of wind blew throughout the room and all of the papers and pens flew off the desk, but all of the windows were closed. We all freaked out and got out of there immediately,” Robinson said.

Others just hope to have a paranormal experience before they leave the Hurst.

“Unfortunately, I’ve never had any scary encounters on campus. I totally believe that Mercyhurst is haunted and would love to have some sort of scary encounter on campus. I’ve walked around late at night by myself, went to all the haunted places alone, and have even participated in a séance freshman year, but still have never had an encounter with the paranormal,” said ambassador and junior Chris Gaertner. “I’m holding out hope though. I want to have a scary encounter before I graduate next year.”

Several well known stories exist around campus. Many of which are told at Haunted Hurst each year. One of the most well known tales is the story of the ring.

The legend states that many years ago a couple was engaged at Mercyhurst. The man proposed and gave her a ring for their engagement right before he was shipped off to war. While he was away at war, the woman received a telegram stating that her husband-to-be was killed in battle. The woman was devastated, removed her ring and became a Sister of Mercy. She then placed the ring on the statue of baby Jesus in the chapel, as a symbol that Jesus was now her true love.

A few years later her love returned and she discovered he was still alive. Unfortunately, she was now a sister and was unable to marry him. Hysterical, she made the rash decision to hang herself in the tower of Old Main. Since then, the rumor continues that she haunts the building and that the ring is cursed.

It is rumored an engaged Mercyhurst student decided to steal the ring years later to wear it when her fiancé arrived to visit her at the college. The day of his expected arrival, she answered the telephone while wearing the ring to hear the terrible news that her fiancé had died in a freak automobile accident.

Ambassador and senior Aldyn Stewart has celebrated Haunted ’Hurst for several years. Her favorite is the tale of the sister’s body in the South Parlor in Old Main.

The room was used in the past as a space to store the deceased as a viewing room. One day a deceased sister was placed inside the room in her coffin for the night. When the sisters had returned the next morning they found that the coffin was empty. The two main doors were open and footprints were found leading away from the room. The mystery was never solved of what exactly happened, but the doors have remained permanently closed since.

Many wonder if these stories are just stories, but Stewart is a believer of the tales.

“I totally believe parts of Mercyhurst are haunted especially after taking a Ouija board to random spots around campus my freshman year,” said Stewart. I had never believed in that kind of stuff but after experiencing some weird things that my logical and rational brain couldn’t explain, I guess it kind of just stuck and now many places on campus creep me out at night and I find myself walking through them quickly.”

Whether the tales are true or not the Haunted Hurst event is still one enjoyed by all. It gets everyone in the holiday spirit for Halloween and adds character to our school.

“I love the uniqueness of the Haunted ’Hurst event and how it brings the community together for some seasonal fun with the twist of history. I enjoy working it and having the opportunity to make it fun, and a little scary, but mostly fun,” ambassador and senior Joe Pudlick said.