“Within the Sole” was a shoe drive on campus that occurred throughout the holiday season.

Senior social work major Marissa Zastawa partnered with the Lead and Seed program through the Coalition Pathways agency to make the drive the huge success.

The program’s goal was to raise awareness in the community about drug and alcohol abuse, along with the dangerous affects of drunk driving.

Zastawa acted as the prevention coordinator, whose main goal was to educate the community about the statistics regarding these issues and train people to go out and spread the word. 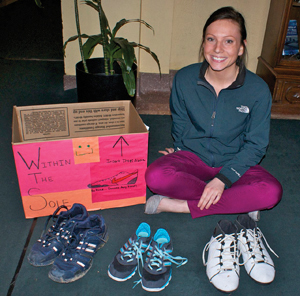 mercyhurst.edu photo: Marissa Zastawa raised a total of 150 pairs of shoes for various organizations in Erie.

Zastawa, along with the Social Work Club of Mercyhurst University, came up with the idea of the “Within the Sole” Project to raise awareness about the growing issues with drug misuse, which often leads to overdose.

Senior social work major Emily Iabone was one of the 10 Mercyhurst students to assist in the planning and execution of the project.

“We thought of this project as a team because it was artistic and it had a strong message to send which we thought would catch people’s attention,” Iabone said.

Her goal was to collect at least 98 pairs of shoes, which is representative of the number of deaths in Erie County due to drug overdose.

“The project was a cool idea because we were able to relate the sole of a shoe to the soul of individual’s lives,” Zastawa said.

Iabone explained that, “98 may not seem significant but that doesn’t include the number of people who have overdosed and haven’t died, so it is still a huge problem.”

The team reached out to the Mercyhurst campus — advertising on Facebook and asked the Erie community for help with this project.

“Marissa is a great leader for this team and has done a wonderful job,” said senior social work major Natalie Magoc. “Our shoe collection turned out better than we expected, which was really exciting and made being a part of the Lead and Seed program worthwhile.”

The project exceeded its goal with a total of 150 pairs of shoes collected and at the completion of the drive were put on display for the Mercyhurst community.

The shoes were displayed to represent the lives lost, and after many outreach actions, the media became involved to continue raising awareness about the issues.

The Social Work Club hopes to continue to do more projects throughout the rest of the year and will inform the campus community of all upcoming events.

The shoes will be donated to several organizations in the community including St. Martin’s Center, Mercy Center for Women and Safe Harbor Behavioral Health.