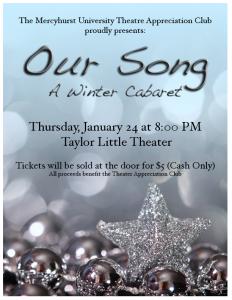 Contributed photo: Students have prepared selections of music from both contemporary and classical musical theater for the club’s first performance.

With theater on the rise on campus, it’s no wonder the Theater Appreciation Club (TAC) is kicking off their first premiere event with style.

A tremendous amount of hard work, time and effort has been given toward the success of the club. The TAC will be hosting its first event, a cabaret, Thursday, Jan. 24.

The event was cleverly given the name of “Our Song” because of the recent revamping of the TAC and the importance of individualism. Brett Johnson, Ph.D., and the executive board of the TAC primarily organized the event.

“Members of the club suggested the theme ‘Beginnings’ for the cabaret because of the new year, the new program, and the newly organized club,” Johnson said.

The cabaret will feature a little over an hour of music performed by the members of the TAC.

The evening will begin with a quartet of auditioned vocalists who will perform “The New World,” from “Songs for a New World.” This exciting and upbeat musical selection gets the ball rolling for an excitement-filled night of extremely talented students.

Senior Katie Cecchetti will be giving her energetic rendition of “Here I Am” along with other students who will showcase strong, empowering and well-known tunes complemented by a handful of introspective and somber songs.

“The cabaret provides our performers with an opportunity to practice their craft as actors and singers, which is vital to the pedagogical mission of the club,” said Johnson. “But it also enriches the cultural life of our university by exposing audiences to selections from American musical theater, which is one of our few indigenous art forms.”

The event will feature the musical expertise of sophomore Ian Gayford on the keyboard, as well as a total of 10 equally talented vocalists. The night will end with an ensemble rendition of “Somewhere” from the hit broadway musical “West Side Story.”

Tickets will be available at the door of Taylor Little Theatre for $5 per seat. The performance will start at 8 p.m. on Thursday, Jan. 24. Don’t miss this great opportunity to experience quality music from fellow students.