Clubs on Mercyhurst campus offer students chances to assist their community every day, just what the Pre-Law Society club did for Legal Aid Volunteer Attorneys (LAVA) with their recent sweatshirt fundraiser.

They decided to run a sweatshirt fundraiser in order to advertise their club as well as donate the remaining money after costs to a deserving organization. 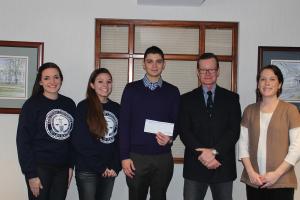 LAVA is an organization that assists low-income Erie community members who need an attorney but may not be able to afford one. This organization provides pro-bono work to these members and is a critical part of the community.

“We decided that instead of just selling sweatshirts and then having our club keep the money, we would rather donate it to a local legal aid group,” said Bollheimer. “We felt this was important because it reflects the mission of the university and we recognized the importance of this work that LAVA does.”

Twenty-three sweatshirts were sold, with a total of $250 donated to LAVA.

The club donated the money on Friday, Jan. 18, with several members were present for the occasion.

“The sweatshirts look great and are super comfortable,” said Alyssa Ross, secretary and vice president of the Pre-Law Society Club. “Having club members wear them around really brings some attention to a long-standing academic club that rarely gets any hype.”

Vice President of Communication and Marketing Brooke Miller designed the sweatshirt while Ross assisted by proposing the option of hoodies and crew necks. Next year, the club plans to continue the sweatshirt fundraiser.

The plan is to keep the logo the same but change the color. This year’s colors were navy and forest green.

Treasurer Jake Jaskiewicz is pleased with the turnout of the fundraiser.

“I’m glad to see that small groups on campus could make such a contribution,” Jaskiewicz said.

There are about five to 10 sweatshirts still available for purchase.

Currently, the club only accepts cash, but will eventually be able to take checks addressed to Mercyhurst University.

To purchase one of the remaining sweatshirts, see Bollheimer in her office, Preston 303, during the following hours: Monday 9:30-noon, Wednesday 9:30-noon and Thursday 9:30-10:30a.m.

Currently, the Pre-Law Society club is unsure of where they will donate the surplus money from next year’s fundraiser, but they have expressed a desire to continue donating to deserving societies as they have done this year.