The 2012 presidential election ended when Barack Obama was sworn into office during the presidential inauguration Monday, Jan. 21.

Due to the courtesy of U.S. Rep. Mike Kelly, Pennsylvania’s 3rd district, several Mercyhurst employees and students attended the occasion. Included in the group were Joseph Morris, D.A., director of the Mercyhurst Center for Applied Politics and Associate Professor of Political Science, along with political science majors Jake Jaskiewicz and Reed Hunter Garetto. 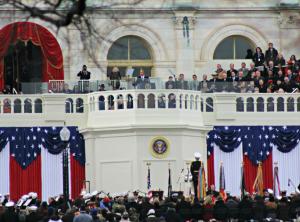 Coon explained that their group was able to attend due in large part to a visit Brad McGarry, coordinator of the Asperger Initiative at Mercyhurst (AIM) program at Mercyhurst, made to Washington, D.C., in the fall.

Because of the good impression this visit made, Kelly invited McGarry to testify before the Congressional Committee on Oversight and Government Reform about the importance of the AIM program. It is because of this visit that more congressional representatives are becoming aware of the concerns and issues of the future of American citizens on the Autism spectrum.

Thus, when tickets became available for members to distribute, Kelly offered tickets to the university.

“It was the luck of the draw that I got chosen,” said Jaskiewicz, who says that the people who were chosen to go were drawn at random. Garetto concurs that he “got lucky.”

For Jaskiewicz, Garetto and Coon, this was the first presidential inauguration they had been able to attend.

“There were at least 800,000 people [at the inauguration],” said Garetto. “So it was hard to get a decent view of Obama’s speech.”

Coon agrees, citing a “crush” of thousands of people as she recalls stepping out onto the lawn where the inauguration was to take place. Thousands of people from different cultures and backgrounds were present at the event.

Both Garetto and Jaskiewicz noted it was difficult to get a good view of Obama’s speech. However, all agree the speech was the inauguration’s shining moment.

“The speech was the highlight of the event,” said Jaskiewicz. “Everyone was waiting to hear it.”

Garetto felt hearing the speech was more important than getting a great visual of the president speaking.

“I’m a political science student,” said Garetto. “I’ve taken classes about what makes a good political speech. It was great to hear Obama’s plan for America.”

Coon also enjoyed the speech, but shared an odd experience as well.

“The most unusual sight was when a man in a brown jacket climbed to the very top of a tree on the Capitol Mall,” said Coon. “Police offered him a ladder and requested that he climb down, but he stayed.”

All those attended who could be reached for comment said they would go again if they could.

“Hopefully, the next [inauguration] I attend will be one when I’m sworn in as president,” said Garetto.

Coon agrees but says that she would put McGarry’s name at the top of the list for the next inauguration.

“His son Connor became ill last week and sadly Brad was unable to attend,” said Coon about why McGarry was not at the event.

Overall, everyone enjoyed the inauguration and were pleased they were chosen to attend.