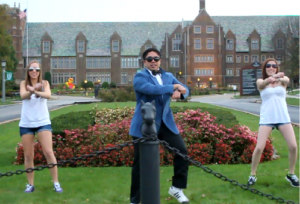 As the song “Gangnam Style” by Psy became a hit on the radio with its catchy beat and new dance moves, people started to become obsessed with the song.

In early November, junior Kellie Wendell noticed the videos online and decided it would be fun to try to create a music video around campus. Her goal was to complete it by midterm week of winter term, which she did.

Wendell wanted to incorporate as many groups on campus that she could.

The other people on camera included members of Mecyhurst Student Ambassadors, Mercyhurst Student Government (MSG) and Reserve Officers’ Training Corps (ROTC). In addition, Dance and Hospitality Management majors were a part of the video.

The video would not have been complete without Mercyhurst President Thomas Gamble, Ph.D., and Parkhurst employees Rhonda Blout and Mimi Hewitt.

Once parts of the video were taped, Wendell edited the video on her computer. While the video looks quite professional, she explained the tools she used were simple.

“Editing is a little hobby I love, but unfortunately I do not have any fancy software,” said Wendell. “It was all done in Windows MovieMaker and filmed with my Canon EOS rebel T2i.”
She went on to explain that anyone can make a YouTube hit.

“All you need are your friends and a camera. We weren’t even trying to make this into a ‘YouTube hit.’ It was all just for fun, but the positive feedback made it even better,” Wendell said.