“What have we gained?”: Former Somali refugee looks to past, future 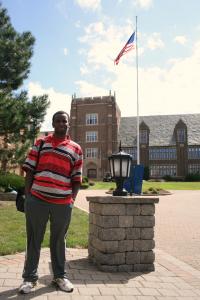 After living in refugee camps for seven years, Abdimalik Abdi, along with his sister and mother, were finally able to escape Somalia

Sitting in the sterile surroundings of a college library in the United States, the words that Abdimalik Abdi speak seem so out of place.

As the 23-year-old Mercyhurst College senior describes his last memory of his childhood home in native Somalia in 1993, his normally jovial tone turns to a deadpan delivery, sending chills through anyone within earshot.

“I remember that day exactly,” Abdi said, who recalls playing with his friends as he did on many other afternoons.

Except this time, gunshots rang out. Crowds of people began running past 7-year-old Abdi and his friends in the streets.

“I kept asking my friends ‘Where are these people going?’ We see our parents running toward us and saying ‘Let’s go. We have to get out of here,'” Abdi said. “We hid under a desk in our home and heard more shots, people screaming, saw smoke all over the place.”

The smoke and gunfire came from warring factions within Somalia, a country whose government and leader, Siad Barre, were overthrown in early 1991.

Abdi’s father, Yusuf, fought as a soldier in the Barre’s Somali army against Ethiopia during the 1980s and was still in the military on the day when their town descended into chaos.

Abdimalik Abdi, the family’s oldest child, cowered inside the home with his father, mother (Marian), two sisters (Fartun and Najma) and brother (Abdinoor).

“Somebody knocked at the door. We didn’t open. We stayed completely silent,” Abdi said, his voice dropping even as he recounts the events 16 years later.

“This person was knocking so hard that you couldn’t stay silent —just bang, bang, bang,” Abdi said. “My father attempted to open the door and, immediately, the guy shot him. Didn’t even say anything.”

Abdi, trying to remain hidden with his mother and siblings under the desk, never saw his father’s killer.

“My father fell on the ground, and the guy just left,” Abdi said. “When we came out from the desk, we saw a lot of blood and my father just laying there.”

Abdi’s mother, Marian, attempted to apply pressure to the wound while Abdi and his siblings sat and watched in shock as their father passed away.

“Is this real?” Abdi kept asking himself. “I didn’t know,” was his response.

The following days, months and years continued to prove surreal for Abdi and his family. They buried Yusuf and fled Somalia for Marafa, a refugee camp in Kenya.

From 1995 to 1996, they lived in a camp south of Marafa in Mombasa, Kenya, a place that Abdi described as “paradise” in comparison to where he had been and where he was headed.

Kakuma is located in a northwestern area of Kenya, near the borders of Sudan and Uganda. Kakuma, the Abdi family’s home from 1996 to 2000, has sheltered tens of thousands of refugees from several African nations since the early 1990s. Abdi described it as “so steamy, hot and dry.” It certainly was not paradise.

In December 2000, only Abdi, his mother and his youngest sister Najma, now 17, were able to fly from Kakuma to the United States through a local Erie church organization’s generosity.

Unfortunately, Abdi’s brother Abdinoor (20) and sister Fartun (22) remain in Kakuma to this day, along with his grandmother.

The separated family members speak on the phone each weekend and Abdi, an employee at Harborcreek’s Wal-Mart, sends money back to help his distant siblings continue to survive.

Right now, for Abdi, who speaks Somali, Swahili and now English (with a slight accent), perhaps more important than graduating from Mercyhurst College is becoming a U.S. citizen.

He hopes to complete the process within the next year.
Gaining full citizenship would allow he and his mother to bring their remaining family members from Kakuma to America, ending what is now a nine-year separation.

After graduation, Abdi, of average height and build, has big dreams.

A business major who has earned more than 90 credits since graduating from East High School in 2004, Abdi wants to either work his way into Wal-Mart management or, better yet, start his own business.

“My mother encouraged me to go to college,” Abdi said. “She said, ‘You can’t just say, I came from a different country. I have no future. I’m just going to work to stay alive.’ I’ve had a rough life and have been through rough times. She tells me ‘Now is the time to make it better.'”

Abdi dreams, too, of returning to Somalia someday to help end the decades-long conflict.

“For me, this education (at Mercyhurst) would give me an opportunity to go back with logic and reason and tell them ‘Hey, you’re still fighting? Why? For no reason,'” Abdi said. “A lot of people lost their lives for this. What have we gained?” 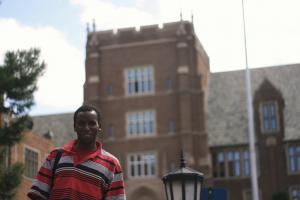 Abdi hopes to finish his education and get U.S. residency to take the rest of his family out of Somalia.