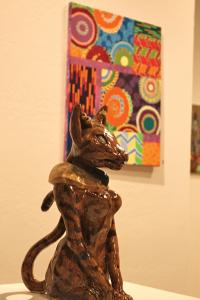 Salina Bowe photo: The art exhibit featured works from an array of artistic mediums that would rival any professional showcase.

The Annual Juried Student Art Show invited the students of Mercyhurst to participate and submit their artwork to be selected for exhibition.

The works submitted span a multitude of mediums including ceramics, paintings, photography, sculpture, mixed media and many more.

The 54 works featured in the exhibition were selected by native Erie artist Ann Magenau.

Magenau began her studies under Joseph Plavcan in Erie and studied at the Cleveland Institute of Art before completing her Bachelor of Fine Arts degree at the Kansas City Art Institute.

She earned her Master of Fine Arts degree from State University of New York Buffalo.

She has had one-woman shows at the Artist’s Committee Gallery and the More-Rubin Gallery in Buffalo, N.Y., and at the Erie Art Center.

Her works have also been exhibited in numerous juried and invitational exhibitions including the Erie Art Museum’s Annual Spring Show, the Marietta National and the Western New York Exhibition of the Albright Knox Art Gallery in Buffalo.

On Thursday, Jan. 31, a reception was held in the Cummings Art Gallery, where the Mercyhurst University Purchase Award and several honorable mentions were announced. The exhibit gives the students an opportunity to display their work to the public.

The Mercyhurst University Purchase Award was received by senior April Alfieri for “Teapot,” an intriguing ceramic pot which truly captured a person’s imagination.

Other recipients of the Purchase Award were junior Caitlin Ewing for “Insomniac’s Depression;” Kathryn Levan for “Yellow,” oil on canvas; and J. John Thiede for “Findlay Lake, NY,” iPhone photography on sheet metal.

It was interesting to see how some of the artists utilized several media, sometimes grouping materials that are not ordinarily seen paired such as Thiede’s unique combination of photography and sheet metal.

There was also a group of students who were awarded honorable mentions during the gallery reception.

Judging this event must have been a near impossible task—each submission was worthy of recognition.

The event certainly made one appreciate the power of art and that Mercyhurst only accepts the highest standard for its art departments.

“It’s very rewarding to get the chance to have your work put out there and appreciated,” said Karly Burns, a freshman participating in the exhibition for the first time. By the end of the night, 160 total guests were present at the reception.

“It’s interesting to see the art of your friends and people you know from class…some of it’s really unexpected,” Detchon said.

Detchon also mentioned that being in the show was “nerve-wracking at first.”

Mary Elizabeth Meier, Ph.D., professor of Art Education, noted that much of the work submitted was created during class.

“It’s a very important event for the students,” she said. “It’s one of the highlights of the year.”

Meier pointed out the event was very well attended, as usual, and there was no lack of public interest despite the uncooperative January weather. The exhibition will run from Jan. 29 through March 17. The exhibit can be viewed at any time during the gallery’s regular hours which are  Monday through Friday, 9 a.m.-4 p.m. and Saturday and Sunday from 2-5 p.m.