Perhaps you’ve heard of an operant conditioning chamber, or skinner box, which is a laboratory apparatus used in the experimental analysis of behavior to study animal behavior.

An award after the name of its creator, B. F. Skinner, has been recently awarded to Mercyhurst University’s Assistant Professor of Psychology Matthew T. Weaver, Ph.D.

Weaver is the 2013 recipient of the B. F. Skinner award for his efforts to discover why nicotine, the addictive component in tobacco products like cigarettes, is so addictive. Particularly, he wants to figure out why some people get addicted to nicotine yet others walk away from the drug.

“I had a group of friends who scattered after high school,” said Weaver, “and some abused drugs, but some didn’t, even though they had similar backgrounds. I wanted to know why that was.” 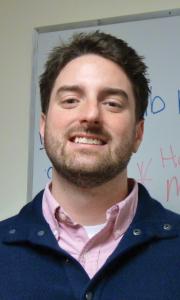 Sami Rapp photo: Matthew T. Weaver Ph.D., won the 2013 B. F. Skinner award for his nicotine research.
Weaver came to Mercyhurst from the University of Pittsburgh where he and colleagues first started to ponder and research why nicotine was so addictive. This turned out to be quite a complicated answer and led Weaver to be awarded the B. F. Skinner award while he continues his research.

“It’s very humbling and gratifying,” said Weaver, about the award, “It is really nice to be recognized by my peers.” Weaver said that being the recipient of this prestigious award validates his research, especially because Skinner greatly influenced his work.

Currently, Weaver and several students are in the process of setting up a lab in order to study nicotine addiction. They have placed fliers all around the university seeking people who smoke to participate in their studies.

Jessica Braymiller, psychology student and research assistant, set up the lab’s first study and anticipates the beginning of several other studies as the lab grows.

“I’m glad to be working under Dr. Weaver,” said Braymiller, “It’s hands-on experience and exactly what I want to do with my future.”

Weaver and the students focus on a behavioral mechanism known as impulsivity, and how that affects nicotine addiction. Along with environmental and other factors, they seek to discover what leads people to abuse drugs and other not so great practices in society.

“Impulsivity is of interest to us (and psychology as a field) because it is relevant to socially important patterns of behavior such as substance abuse, pathological gambling, eating disorders, etc.,” said junior Jordan Kist. “I am very interested in the study of behavior, addiction, and the brain mechanisms involved.”

Senior Josh Kimm is one of two “team leaders” running the research project that focuses on the effects of nicotine. His interest in Weaver’s research and psychology in general concerns the mental disorder known as schizophrenia.

“You mention the disorder (schizophrenia) and everyone has heard about it. It’s one of the most widely known and occurring disorders yet it is able to baffle almost everyone as to why it occurs/what causes it,” said Kimm, “I just want to know more about the disorder and maybe understand what causes it. Hopefully my research here might be able to tell me a little bit more since it has been found that schizophrenic (people) have a higher smoking rate than non-schizophrenic (people).”

The lab runs simple experiments such as using an eye tracker to see if smokers look at images of ashtrays longer than non-smokers, and plans on continueing to in the future. Weaver hopes that by keeping students involved in the journey, concepts learned in the classroom will be translated into field research.