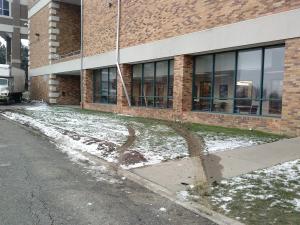 Zach Dorsch Photo: Students early this morning were shocked when a car hurtled against the wall of the 24-Hour Lounge in Hammermill Library. No one was injured.

Last night, Mercyhurst students who were working in the 24-hour study lounge were shocked when a car crashed into the building at approximately 2 a.m.

“My friend and I were getting up to leave. We were both facing the window. My friend saw the car first and thought it shouldn’t be that close,” Moye said. 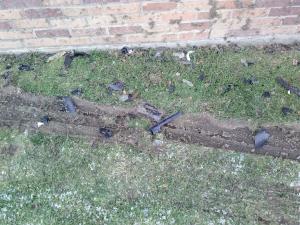 Zach Dorsch photo: The driver drove away, leaving behind pieces of the car.The front left part of the car crashed right against the wall of Hammermill Library, where a student was studying feet away. No one was injured.

The driver backed up and drove off, leaving behind several destroyed parts of the car, witnesses said. The students then called Police & Safety who tried to track down the car.

“What shocked me was the speed at which the car hit the wall,” said Moye. “If it weren’t for the brick in the wall in the lounge, the car would’ve gone straight through the glass.”