From Parkhurst’s Rhonda to Louie Laker, from the administration to the sports teams; the entire Mercyhurst community came out and supported the rowing team on their Mercyless Endurowthon, where they were able to break world records: the most people on a single erg and the men’s lightweight team achieved the longest distance in 24 hours.

A total of 600 people from the Mercyhurst and Erie communities came to help the team make history, breaking the record previously held by the government of Poland for the most people on a single erg. A few minutes before 11 a.m. on Friday morning, senior Liz Lynch became the record breaker, being the 355th person in the rotation of students and faculty members. 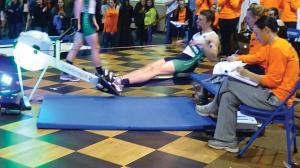 Meanwhile, the men’s lightweight team was focused on breaking their record; having a team of athletic trainers and staff that helped them with their needs; helping them stretch, bringing them drinks and food and whatever else was needed to complete the lapses of 30 seconds per person with a five-minute break.

“The team really put their bodies through hell and back, but they never gave up,” Student Activities Council (SAC) chair Adam Borgman said.

Senior rower Jake Schuppe felt very accomplished about what his team had done.

“All of us really helped each other get through it. Our coaches, Adrian and Jamie, were instrumental to us, as they kept us motivated and united,” he said. “We were all hurting, some of us were injured, but the adrenaline kept us going. When we were done, we were all overcome with a feeling of accomplishment. It was incredible.”

Their average split time was 1:35.6, a full 11 seconds less than the previous record-holders. However, the team only got faster as the timer kept going, fueled by the adrenaline and the motivation the community was providing them.

Borgman added, “The single erg record belongs to the Mercyhurst student body and the local communities. This is something they achieved; their dedication is what helped make this record what it is.”

The donation page at http://endurowthon.mercyhurst.edu contains information about the charities benefited and how to help the cause.