While competing in the 2013 NCAA Division II National Championship in Birmingham, Ala., this past weekend, the Lakers received incredible recognition that reflects a spectacular and successful 2012-2013 season.

On Sunday, March 11, Mercyhurst University wrestling was named 2012-2013 Academic National Champions. This prestigious recognition was awarded to the Lakers for their impressive team cumulative GPA of 3.379.

Also on Sunday, head Coach Mike Wehler received the Division II Bob Bubb Coaching Excellence Award, which is well deserved after leading the Lakers to a winning percentage of .833, the best in program history.

Additionally, eight Lakers were selected to be a part of the 2012-2013 Division II All-Academic Wrestling team by the NCAA Division II Wrestling Coaches Association.

Fellow Laker quarter-finalists freshman Dylan D’Urso, Griffith and Schaefer did not make it through to the medal rounds, but put up tremendous fights. D’Urso ended the season with a record of 30-7, Griffith with 25-12 and Schaefer with 24-13.

Dylan D’Urso was awarded Most Technical Falls in Division II for his performance in the NCAA Division II National Championships with 11 total technical falls.

D’Urso had a stupendous rookie season, holding a 19-match win streak from Dec. 15 to Feb. 23. Additionally, his 30 recorded wins this season are the fourth most by any Laker rookie. 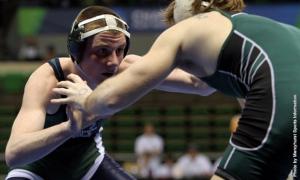 “It’s taken a tremendous amount of hard work to get where I am right now. All the late nights spent in the gym on my own and the practices have pushed me through this year,” said D’Urso. “We’ve all given up a huge chunk of our social life to get to this point, but it’s all worth it.”

On Friday, March 9, Bohince clinched an impressive seventh-place all-American finish in the NCAA Division II National Championship. With this, Bohince became Mercyhurst University’s 23rd All-American. Bohince finished the season with a record of 35-7.

Bohince utilized his extreme passion and dedication to have such an extraordinary season.

“I just work hard in everything I do to be the best I can. I dedicated a lot of my time to working out at least twice a day; running or lifting in the morning and then practice in the afternoon,” said Bohince. “It was very helpful having great teammates to beat me up in practice and make me better.”

“I don’t really pay attention to the rankings because I don’t want to worry about who I’m wrestling, of what I’m ranked compared to them,” said Bohince. “But, I guess it feels good to get recognized as one of the top wrestlers in the nation.