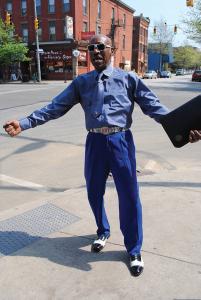 After the judges of the “Be Bill Cunningham” contest thoroughly considered the best submitted street fashion photograph, junior Caitlin Ewing won with her unique photo.

Ewing has always had an interest in photography and took classes on the subject since high school. She is a graphic design major and photography minor. She took this photo while enrolled in Assistant Professor of Art Gary Cardot’s class for a series she did on street photography, with her particular focus on street fashion.

“Ironically, I did not care for this photo, but it’s turned out to be quite the favorite,” Ewing said.

Ewing explained that she tries to submit her work into as many contests as possible, so others can admire her art. The Bill Cunningham contest was just another opportunity for her to display her work.

Her sister introduced her to the Bill Cunningham documentary because she thought Ewing would love Cunningham’s passion for photography.

“I saw the Bill Cunningham documentary my freshman year,” said Ewing. “I was entirely too inspired that it’s impossible to keep Cunningham out of perspective when I shoot street photography.”

Ewing recommended the documentary to anyone because it is not only a well done documentary, but it is also funny and short.

While Cunningham is a unique personality and individual, Ewing admires his drive for what he loves: photography.

“Cunningham’s dedication is what truly inspires me; the fact that he goes out every day with no preconceived notion as to what trend is current, and can then pinpoint it to a T just amazes me,” Ewing said.