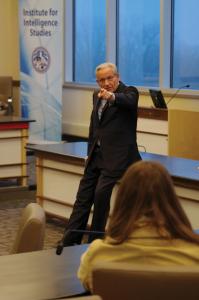 Zach Dorsch photo: Bob Woodward speaks to students about journalism and current events Wednesday at the CAE board room.

“All good work is done in defiance of management,” author and investigative journalist Bob Woodward told students during his visit.

Despite delay from the weather, causing his trip from Washington, D.C. to take approximately 11 hours, Woodward arrived Wednesday, April 10, to address the Mercyhurst and Erie communities.

His visit to Mercyhurst began with a brief press conference, followed by a question and answer session with select students from the communication and political science departments, as well as several students from Johns Carroll University.

Questions ranged from the current affairs around the world, to his favorite person to interview.

His engaging personality and personal stories created an entertaining question-and-answer session for students.

One story involved his interview with President Bill Clinton in 1994.

“You go into the Oval Office and [Bill] Clinton drills you with this eye contact that almost creates a gravitational force — he does not blink,” said Woodward. “And he slows time down just a little bit so it creates an atmosphere of intimacy.”

While the interview appeared promising, the result was not what Woodward expected.

“I’m thinking, ‘Wow, he realizes how brilliant my questions are,’” said Woodward. “And I’m thinking “Wow this is such good information,’ and he’s focused, answering [and] there’s nothing else in the world. I remember thinking when I left, this was just a great interview, I got all kinds of new information.”

Woodward explained that he got the tape transcribed, read it without the sense of intimacy and realized it was “mush.”

“He said nothing, but it sure felt good,” Woodward said.

After the question-and-answer session and a private dinner with Mercyhurst University President Tom Gamble, Ph.D., several faculty members and a couple students, Woodward presented his talk “Inside the White House: From Nixon to Obama with Bob Woodward and Carl Bernstein.”

Senior Aaron Loncki expressed his excitement for the event.

“I was almost late to the Q and A,” said Loncki. “I rushed in and sat down. As I sat down, it dawned on me– that’s Bob Woodward. There’s the guy who broke Watergate.”

“I enjoyed his inside stories, especially about the Clintons,” said senior Carrie Gambino. “It definitely made me want to look into his written works.”

Loncki added his thoughts on Woodward’s experience and influence in journalism.

“He’s from an older age of journalism,” said Loncki, one with more time for deep coverage, one concerned with the facts. It’s about reporting what’s affecting people and presenting the story as it is.”

Communication Instructor Brian Sheridan organized the event and was pleased with how it turned out.

“We were thankful that it was such a great event,” said Sheridan. “Personally, there is always a fear of meeting a person who you’ve idolized because they may not live up to expectations. Woodward exceeded all of the expectations I previously had of him.”