Do you enjoy “paying it forward” to brighten someone’s day? Senior Caitlin MacBride was inspired several years ago by simple, kind gestures and incorporated them into the film, “100.”

“I see so many people hurting and people don’t care,” said MacBride. “Something as small as a smile can really change someone’s life.”

She came up with the idea and then decided to enter a script contest to try to make her dream a reality.

MacBride is passionate about filming and definitely foresees it in her future.

She hopes to be a director, similar to writer and director Nora Ephron. Ephron was known for her movies “Sleepless in Seattle” and “You’ve Got Mail.” MacBride aspires to be like Ephron and wants people to be inspired by her movies and to feel some type of emotion.

The contest awarded her $200 to work towards the production of her film. She was able to save most of the money because she didn’t use many props, didn’t have to pay for locations and all the participants were volunteers.

She advertised the need for actors and actresses through posters, social media and word of mouth, with the help of her friends.

The main character, junior Mikayla McNamara, approached MacBride at the bar and expressed how excited she was about the idea of the movie. MacBride’s first question was whether or not the girl could fake cry. McNamara answered yes, and got the part of the leading role as Hannah. 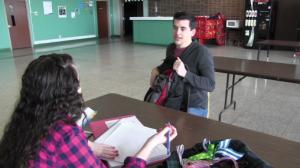 The film “100” is about a group of 100 high school seniors who are connected by a string of good deeds, which many of us know as “paying it forward.”

The movie will premiere on Sunday, April 28, in the Taylor Little Theatre. The event is free, black tie optional, and there will be a red carpet event at 2:30 p.m., prior to the showing of “100” at 3 p.m. A reception will follow the showing of the movie.

For more information on the film “100” or the upcoming event, contact Caitlin Macbride at cmacbr51@lakers.mercyhurst.edu.