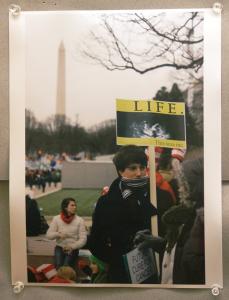 Zach Dorsch photo: James Conley’s photography from the “March for Life” is displayed in Zurn Hall.

While wandering to and from class every day, I pass quite a few pieces of art and examples of the creativity through artistic media from sculpture to paintings and photography.

One set of photos in particular caught my eye when I noticed the amount of passion and examples of human emotion captured in just a few shots.

Junior James Conley attended the “March for Life” event on Jan. 25, in Washington D.C. The exhibit, which shares the same name as the anti-abortion event, features what seems to be a case study of people in their natural habitats, as no shot is staged in the collection.

“It was the weekend we all were supposed to leave campus due to the water leak, and as I made plans to go home, the opportunity to go to the march arose, and having gone several years in the past I kind of figured ‘why not’,” Conley said.

“It was a really last-minute decision to go but I saw a chance to take some pictures and play the ‘documentary photographer.’ When I was there I used my camera to search the demonstration and people, for those scenes which made an emotional statement for the purpose of the March for Life,” Conley said.

There were quite a few representations of various perspectives throughout the shots. From ultra-personal to crowd shots, Conley varied his photos and didn’t show a prejudice to one angle over another. Using varied angles and techniques, Conley captured the appropriate atmosphere that surrounded the event.

“From the photo of a young child with a sign, to the wider angle shots showing the massive number of people there, they all have something in their content that reference the ‘Why?’ of the March,” Conley said.

At first, Conley didn’t expect for the photos he took to be displayed in the hallway of Zurn Hall; however, he brought them to photo professor Mr. Cardot.

Cardot saw the potential in the shots and encouraged Conley to use them for a hallway exhibit.

“So I sorted through them, sifting regular old snapshots away from those that reached more to the core of the event,” Conley said. “I am not looking to argue anything with the exhibit, merely displaying the side of the issue I stand on, and to possibly raise awareness of the march itself.”