Ouegnin nominated for College Dunk of the Year

The slam-dunk is arguably the most electrifying type of basketball shot in the history of the game. It is a high percentage shot known for its crowd-pleasing capabilities.

Dunking has progressed in the college ranks from being banned in the NCAA in 1967, to now being one of the more prominent parts of college basketball. In recent years, there has been an annual award for the Hoops Manifesto’s NCAA College Dunk of the Year. Mercyhurst’s own Jonathan Ouegnin was nominated for it.

On Feb. 20, Jonathan Ouegnin threw down a one-handed monster dunk over three Gannon defenders, which resulted in a three-point play. The crowd went crazy and not only did it help lead the Lakers to a 44-36 victory over the nationally ranked Gannon Golden Knights, but it also landed Ouegnin a spot on the ESPN Top 10 Plays for Feb. 21-22.

“It was pretty cool, I was happy,” said Ouegnin. “Especially because it is the only Division II selected dunk.” 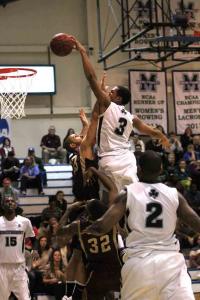 Matt Durisko photo: Junior Jonathan Ouegnin towers over a Gannon defender during his dunk on Wednesday, February 20.
After completing the dunk, Ouegnin actually thought that he had been called for an offensive foul and ran back ready to play defense. Moments later you could see a smile light up across his face to find out that the referee actually called a shooting foul.

“Hey, I knew he was going to dunk when I saw him turn the corner off the pick and roll,” sophomore teammateTerrence Ingram said.

“When you practice with someone everyday, you start to understand their tendencies. I was just shocked the way he dunked on them,” said Ingram. “You can ask anyone, I am the first to go crazy but this dunk surprised me so much that I was asking myself, ‘did that really just happen?’ It was really a surreal moment, and even better that it was against our crosstown rivals.”

Ouegnin’s fantastic dunk was able to put Mercyhurst University on a national level, even for just a day. It was a crowd-pleaser that all Mercyhurst basketball fans will remember for a very long time.

To vote for Ouegnin in the NCAA College Dunk of the Year until Sunday, April 28, by visiting the Hoops Manifesto website.