The Erie Metro Transit Authority (EMTA) will be canceling its downtown weekend route from Thursday, April 25, through Sunday, April 29, due to inappropriate behavior on the bus.

The students were responsible for creating an unsafe environment, and acting in a way that goes against Mercyhurst’s core values, which the university tries hard to uphold.

Students will have to provide their own transpiration this weekend if they plan on going downtown. 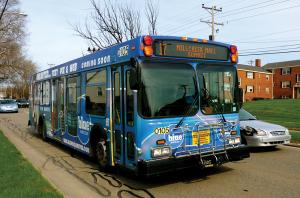 Junior Bobby Summer could understand why the transit authority was upset, but does not think the behavior was more outrageous than it usually is. “I think they should expect these sorts of shenanigans,” Summer said. “If they were to close down permanently, that raises the possibility of kinds drinking and driving.”

The bus route will be on hiatus this weekend. However, EMTA will resume the weekend service beginning May 2. If student behavior improves, the bus service will continue to run until the end of the year.

If students continue to act inappropriately, the service will be canceled for the rest of the year. Cancellation this year could also mean that students next year would also lose the service.

When asked about the changes to the bus schedule, junior Kristen McKinson said, “Being an international student, I have no means of getting around in Erie. The bus system allowed me and my other international friends to explore downtown without worrying about cab fares.”