Students joined together to decorate Garvey Park with t-shirts to create awareness for mental illness. 780 shirts were collected across campus to symbolize the number of college suicides per year.

Aside from the Out of Darkness Walk at Presque Isle, the 1100 event is the only suicide awareness event held on campus.

Active Minds is a national non-profit organization that works to raise mental health awareness among young adults as they transition into adulthood. 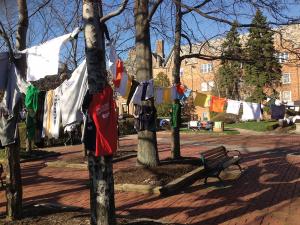 Caitlin Mininger photo: After the event took place at Garvey Park, the t-shirts were donated to homeless shelters across Erie.

The national 1100 event is held Oct. 2, but Active Minds held their event in the spring on Monday, April 22, due to the weather and lack of time to raise the t-shirts.

After the event the t-shirts were donated to homeless shelters across Erie.

Last year, awareness was expressed with glow sticks, but this year the club decided t-shirts would be a better option that would also benefit others.

“We needed something that created a powerful visual image,” said Vice President Emily Dietrich. “Last year we chose to do glow sticks, but we were left with 1100 broken glow sticks, so this year we wanted to do something with a benefit.”

The shirts were hung in the park to symbolize those lost to suicide.

Dietrich continued that the shirts held multiple forms of symbolism.

“It is also the size of the shirts, you can almost imagine a student standing there,” Dietrich said.

The t-shirts were collected from across the country, but primarily came from the Erie community and Mercyhurst campus with help from club adviser Missi Berquist.

“It truly meant a lot that Mercyhurst supported us, over half of the donated shirts were from our campus,” Dietrich said.

In the future, the club hopes to branch out the event by including other college campuses in the area. This extra involvement would include the collection of shirts as well as spreading the word past Mercyhurst campus.

“Too many students suffer in silence with their stress and it only produces negative results. We only hope we can meet our goal of 1100 shirts, but if not, as long as someone who needs help realizes there are other choices,” Dietrich said.