Recently, the psychology department made a move to their new building on Briggs Avenue, located next to Warde Hall.

Before their move to the new location, the Psychology Department was located in the Audrey Hirt Academic Center since the building’s construction in 2002.

Many students have no idea where the psychology building is when asked. As this is a major problem, recognition for the building needed to be established. 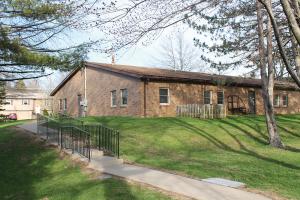 Michael Murphy photo: The psychology department has moved to Briggs Hall, located next to Warde Hall, which was previously occupied by the Interior Design department.

Student and Research Assistant Shannon Shaffer was happy with the department’s relocation.

“I think the move was fine, I think the fact that it isn’t known is the problem. We’ve had people call and email and say they don’t know where it is, so trying to explain where it is is hard. Police and Safety didn’t even know where it was,” Shaffer said.

Along with the surge of new psychology students, there has been the addition of Matt Weaver, Ph.D..

The new building provides both the students and the professors with a larger laboratory space for independent research. In the immediate future, the staff believes that this is a perfect fit for their department.

The psychology department was also eager to announce the new offering of a concentration in Applied Behavior Analysis (ABA).

Originally, this was an area of interest introduced to the department by Robert Hoff, Ph.D.. Those trained in the field of ABA help people change their behavior in desired ways; the purpose of these courses is to provide the trainee with a world certification.

“It is very rare to be certified at the undergraduate level, but, with the ABA program, you can be,” Marilyn Livosky, Ph.D., head of the Psychology department, said.

She also stressed that this program is not only limited to the education and psychology fields, but it can also be applied anywhere where there is a form of social interaction.