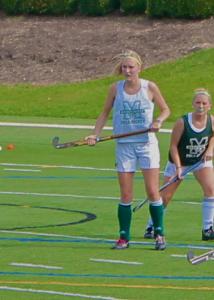 Salina Bowe photo: Junior Blair Pembleton earns PSAC player of the week award for her efforts with the women’s field hockey team.
The Lakers regrouped themselves as they headed into the next few practices.

“The best advice I could give my teammates was to remember the feeling after such a tough loss and use it as our motivation in the next upcoming games,” says Pembleton, when asked how the women can stay positive.

After opening the season with a hard fought loss against Millersville, the women’s field hockey team was able to pull off two straight wins with the help of junior Blair Pembleton.
The Lakers regrouped as they headed into the next few practices.

“The best advice I could give my teammates was to remember the feeling after such a tough loss and use it as our motivation in the next upcoming games,” Pembleton said.

Scoring two goals against Limestone and a game-winning goal against East Stroudsburg helped lead the team to a good momentum shift early on this season.

Pembleton’s on-field success for the two wins earned her the PSAC player of the week. She is the first Laker to receive the award since 2009.

It was definitely an honor to receive the weekly PSAC award, but it really is a team award in my eyes, because I couldn’t have gotten it without them,” Pembleton said.

Her attitude was strong heading into the next couple of games.

“My personal mindset going into the next two games was to be hungry, to put the ball in the back of the net, and to work hard and give it 110 percent for all 70 minutes,” Pembleton said.

When asked about the team’s success with three wins in the past four games, she mentioned “Key communication, supporting one another starting from the goalies all the way up to the forward line, and pushing each other,” as a helpful component.

The ninth-ranked Lakers are continuing to do well with a current 3-2-0 record. They are hoping for more success as they face other top ranked teams coming up.

“We have a new mindset this year … we’re all about coming together to make a statement to other teams and most importantly to reach our goal of making it to the PSAC championship,” Pembleton said.