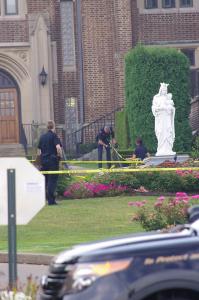 On the morning of Friday, Sept. 20, the campus awoke to shocking and tragic news — Christopher Swanson, 41, an ex-high school teacher from Clearfield County, had taken his life with a rifle in feet away from the statue of Mary in front of Old Main.

Along with the shock of his death came many rumors at Mercyhurst, some of them apparently supported by Swanson’s own postings on the Internet prior to his death. Others were simply wrong.

Swanson, a former high school physics teacher for the Smethport Area School District, reportedly had a previous relationship with a student now attending Mercyhurst. The student expressed to Swanson that she didn’t reciprocate his feelings. Swanson divulged that he intended to take his own life throughout the past year. His stress became evident even in a Facebook post from 2011. “She’s going to Mercyhurst, I’m going to be left alone… She would never love me anyways. I’m 22 years older than she is.”

Originally from Clearfield County, which is about two hours southeast of Erie, Swanson drove from his home late Thursday night or early Friday morning to Mercyhurst with clear intentions to end his own life. Several news media, including the Bradford Era, The Erie Times-News and the Huffington Post, have reported that he sent multiple text messages to loved ones and posted Facebook status updates in the days and hours preceding the event.

According to the Bradford Era, a Facebook posting from Swanson said: “I’m going to kill myself,” the posts read. “Because I’m trapped in a hideous, vile, despicable world, a world maliciously engineered to obstruct the fulfillment of one dream, my only dream, sharing my life with” the student.

One of Swanson’s last posts — dated Friday — is the most chilling: “I awoke this morning for the last time.”

Friends and co-workers of Swanson took notice of the warning signs and notified Smethport high school officials, according to the Huffington Post. Police presence was intensified, as nobody was quite sure what Swanson would do. The school was on lock-down Friday morning until word came from Erie that Swanson was dead.

According to Erie County Coroner Lyell Cook, Swanson’s death took place sometime between the hours of 2 a.m. and 4 a.m. on Friday. After further examination, according to the Erie Times-News, it was discovered that the rifle contained two bullets. This raised the question — Was the other bullet meant for the Mercyhurst student or someone else here?

“There is no hope … I always knew it would end like this,” – Swanson.

It took the Clearfield County officials by surprise, though, that he would drive two hours to Mercyhurst.

At Mercyhurst, Swanson parked his car in the circle in front of Old Main, sent another message from his phone and then shot himself. For three to five hours, Swanson’s lifeless body lay on the sidewalk immediately south of the Mary statue. It went undiscovered until a university maintenance staffer found it around 7 a.m., just as students began to walk to class or to breakfast at Egan Hall. At least four Erie police officers, the Erie County Coroner’s Office, a Pennsylvania State Police trooper and an Erie Bureau of Fire engine responded and were on the scene until nearly 9 a.m.

Questions continued around the Mercyhurst campus: Did no one see the car? Did no one hear the gunshot? Did Police & Safety patrol the circle?

Zirkle said that security cameras in that area were located too far away or at the wrong angle to show what happened.

Mercyhurst rallied together after the incident, however, offering endless amounts of love and support for each other. This support extended into the surrounding communities from our neighboring universities.

“When you have a crisis like this, you really see the best in people, and that’s exactly what we saw. From Police and Safety to the counseling center – everybody went above and beyond the call of duty. It really was Mercyhurst and Erie at it’s best,” Zirkle said.

Students are welcome to participate in prayer and are encouraged to contact the Mercyhurst counseling center at (814) 824-3650.