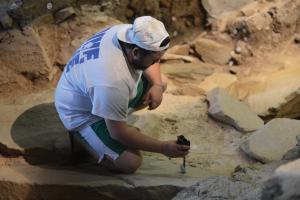 Late this summer and into this fall, five Mercyhurst Archaeological Institute students along with several faculty members traveled to Meadowcroft Rockshelter in Washington County, Pa., to repair damage to the site caused by rainfall.

James Adovasio, Ph. D., the Dean of the Zurn School of Natural Sciences, is best known for his excavation and research of Meadowcroft Rockshelter. Meadowcroft is a prehistoric archaeology site that changed the views on when humans first inhabited the Americas.

Before his research, it was thought that humans only came to the Americas around 13,000 years ago. Adovasio’s research pushed that date back even further to 16,000.

From July 31 through Aug. 15 and again from Sept. 13 through 15, recent graduate Mike Way, seniors Lindsay Boyer, Jessica Higley, Jamie Badams, and junior Michelle Farley traveled several hours to the Meadowcroft site. While there, they used the skills they learned in their classes to repair part of the site that had been damaged during heavy rains. All five students have previously gone to Mercyhurst’s field school in Toas, N.M.

As MAI Lab Director Anne Marjenin stated, the students did all of the work.

“The water had washed out portions of various excavation units and had apparently pooled at the bottom of those units, which left behind a moist collection of mixed sediments. The first thing we did excavation-wise was to remove that disturbed sediment from the floor of the excavation,” Badams said.

At the site earlier in the summer two inches of rain had fallen within an hour, causing a leak that washed away part of the excavation profile.

After removing the disturbed sediment the team used razor blades to re-establish the walls of the intact units. After re-establishing the original stratigraphy of the site, Professor Quinn, Adovasio, and Anne Marjenin, along with the group, mapped the site. Lindsay Boyer stated that the team, “actually referred to a map created during the first excavations in 1973!”

While all the students said that the trip was great, two of them got ill during the first trip and had to go to the hospital.

“As unfortunate and unpleasant as the ordeal was at the time, the sort of demented humor of the situation has resulted in some good laughs,” Badams said.

Early in the year, this humor was evident as Badams and Farley walked throughout the archaeology department wearing homemade hazmat suits.