With a record of 4-3-1 so far and a successful win against No. 9-ranked Millersville on Saturday, the women’s soccer team is looking forward to an amazing season.

With two goals scored against Gannon on Sept. 21 and leading the team with the most points scored, sophomore Lauren Testa is stepping up to the plate, receiving PSAC player of the week.

“It feels amazing to receive PSAC player of the week,” Testa said. “The win against Gannon was something I really wanted, and attaining it was a great feeling. I was happy that I was able to make a contribution. Being recognized by the conference is an honor. There are many talented soccer players out on the fields each week. My teammates have been very supportive and I share it with them as every game is a team effort.” 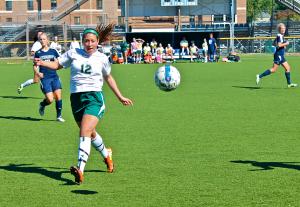 Salina Bowe photo: Lauren Testa received PSAC player of the week for her performance during the game against Gannon, scoring two goals for the Lakers.

Lead by junior captain Janine Wong, and with a total of seven new freshmen, the Lakers are a young team and are looking forward to growing within the program.
“The team has had some key wins this year, beating a few nationally ranked teams (No. 7 West Chester, No. 21 Gannon, and most recently No. 9 Millersville). We have also had a couple of very close disappointing losses,” Testa said.

“Overall, we are a young and talented team. Towards the end of last season, we really started to gel. This year, with the addition of a talented group of freshmen, we have been able to build on that and continue improving. This is a team with a lot of heart.”

The Lakers are now 2-0-0 when facing a nationally ranked team with their recent successful wins and are looking to keep moving forward with this momentum.

“I think the toughest game was against East Stroudsburg. We had just come from the win over West Chester which was a huge win for us. We really left everything on the field there. Having to play an undefeated East Stroudsburg team the next day was challenging,” Testa said.

The Lakers’ next home game will be against California University on Wednesday, at 4 p.m.