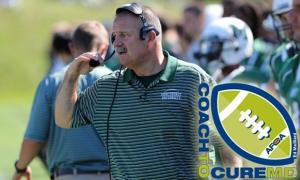 Ed Mailliard photo: The Lakers head coach, Marty Schaetzle is more than happy to be a part of the MD program for another successful year.The Mercyhurst football team and coaches are glad to be a part of the muscular dystrophy fundraising event for the sixth straight year.

This non-profit event helps raise money for research on the disease that affects boys and young men everywhere. Duchenne muscular dystrophy can cause a loss of muscular mobility and respiratory and cardiac function decline.

Over the past five years, Coach to Cure has reached just over $1 million in donations. Fortunately, last year was the highest it’s ever been with 10,000 college coaches and 580 different teams that participated.

The goal is to continue growing with the support so research can be completed in hopes to eventually find a cure for this disease.

Lakers head coach, Marty Schaetzle is more than happy to be part of the MD program for another successful year.

“The game and weekend gives us a chance to be part of something much bigger than the game. It means a lot to join forces with the other programs nationwide,” Schaetzle said.
This genetically fatal disease is fairly rare and young men can carry the disease without realizing it until the effects eventually take their toll.

The importance of joining efforts with other coaches in the American Football Coaches Association is huge. Schaetzle agrees, adding, “The goal of the weekend is to raise awareness and money to fight MD.”

“Our goal is to play with great passion like we have in the past. If we can get to that level our X’s and O’s will be much better,” Schaetzle said.

The team’s goal for Saturday’s game was not only to gain support or raise awareness but also to play well and make it another memorable year.

The Lakers have had a rocky start to this year’s season but they are working hard and looking forward to the rest of what their schedule has to offer.

Currently, the Lakers are 1-3 and during their recent loss on Saturday, Slippery Rock raced out to a 38-10 lead at halftime before settling for a 58-34 win.

There were some key highlights to the game. Senior Colin Kimball gained another interception 58 yards to the house for the Lakers.

It was the fourth longest interception return in school history and it marked Kimball’s fourth of the season. Kimball currently has four of the team’s six interceptions this season.
Also, senior kicker Steven Wakefield broke the school’s record of having the most career field goals of 24.

Mercyhurst will play its second home game of the season on Saturday against Cheyney University. Kick-off starts at 1 p.m. The game will be part of Homecoming and Parents’ Weekend.