Women’s tennis with victory in first match of the season

Senior Caroline Bristol and junior Sarah Baich combined their efforts to earn an 8-1 victory over Allegheny’s duo, Sun Mo Koo and Andrea Brush on Wednesday September 18. This helped power the Lakers to win two out of three double matches.

Getting off to this great start was important to begin their season with a successful day for the ladies. “It’s always nice to come out of doubles ahead of our opponents because it puts more pressure on them for the singles. Everyone played great doubles and it was a positive way to start out the match,” Bristol said.

The win gave more confidence to the pair in their singles matches as well. All Lakers combined for a singles sweep against their opponents at Allegheny. 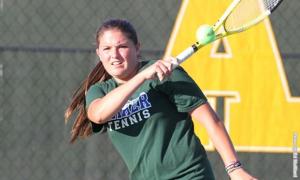 Ed Mailliard photo: Senior Caroline Bristol is a key player to this year’s team and helped earn the Lakers a 8-1 victory over Allegheny College.

“Sarah and I played solid doubles that day. We figured out our opponents strategies and were able to finish the points, especially with Sarah’s great volleying.”

Bristol and Baich came out strong and remained consistent, while they were a part of the Lakers’ first win in their first match of the year.

Their preparation and mentality contributed to the double match victory. They appear to be well suited for one another as their chemistry proved to dominate.

The girls still have a long season ahead of them but are confident in their team’s goals for the remaining matches. “For the rest of the season, it is important to come out strong in doubles and continue through to singles very focused and committed to our goals of winning,” Bristol said.

Stay tuned as the Lakers’ next match is postponed to a later date. The Lakers hope to continue to build off the leadership of the seniors and juniors and have a well-rounded team across the board for the 2013-2014 season.