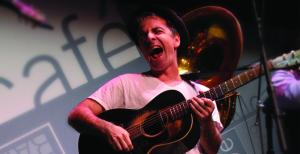 miac.mercyhurst.edu photo: Howard Fishman, known for his mixed music of soul, pop, gospel, country, and jazz, is set to perform in the Taylor Little Theatre on Thursday, Oct. 3, at 8 p.m.

At 8 p.m. on Thursday, Oct. 3, the Taylor Little Theatre will be host to Howard Fishman.

Howard Fishman mixes soul, pop, gospel, country and jazz to create a sound entirely his own. David Sprague, of VARIETY, says of Fishman, “… like Dylan himself, is loath to tarry very long in any one particular neck of the musical woods.”

The Basement Tapes Project explores the mysterious underground recordings made by Bob Dylan and The Band in 1967.

It has been presented at major national venues, including arenas like Lincoln Center’s “American Songbook” series and at “Duke Performances” at Duke University, to much applause.

Performing both well-known songs from the album Basement Tapes as well as songs that have never been made public, The Basement Tapes Project uses songs as suggestions into the life of one of America’s most prominent performers.