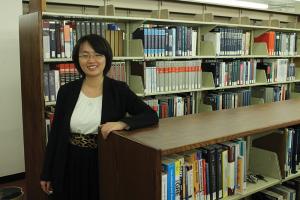 Mercyhurst has gained many new faculty members this year. One comes to the university from China.

New assistant professor of mathematics and computer systems Bowu Zhang, Ph. D., comes from the capital of the Anhui province, Hefei. Shanghai is about a two-hour train ride from Hefei.

Zhang stayed in her hometown until she finished college at the age of 22. After college, Zhang applied to graduate schools that were as far away from her hometown as possible. She desperately wanted to see the world outside of China.

At the time she was applying for graduate schools, Zhang thought the farthest she could get away from home was the United States. Lucky for her, she got an offer from George Washington University in Washington, D.C. After accepting the offer, she left for the United States.

Washington, D.C. was the first place Zhang went to in the United States. At George Washington University, she studied to receive a Ph. D. in Computer Science. Zhang spent five years working towards this goal, and had a great time at the university with her teachers and classmates.

Zhang was barely able to speak any English when she first went to Washington, D.C. However, as she got used to life in the United States, she was able to communicate with people more easily.

“That was quite a tough time, but I guess most people who leave their hometown for the first time would have a similar experience,” Zhang said. “You may feel hard, and you may feel lonely. But what you can do is just to hold on, and try over and over again.”

When Zhang first came to Mercyhurst for her job interview, all the lights were on because it was in the evening.

“Old Main just looked like the Hogwarts school in ‘Harry Potter,’” Zhang said. “At that moment, I knew this is it! This is my dream place.”

Zhang says that she has nice colleagues and students, and she cannot think of a better place to work than at Mercyhurst.

According to Zhang, Erie is a lot like her hometown. It is not big, and it is next to a big lake. Zhang really enjoys the life here.

If you would like to know more about Bowu Zhang, Ph. D., you may contact her at bzhang@mercyhurst.edu.