Bestland was named co-player of the week and Skinner was named rookie of the week for their outstanding performances against Minnesota State–Mankato last weekend.

With a record of (1-2) so far after falling short to Ohio State University (4-3) during overtime Saturday afternoon, the Lakers are looking to make a comeback and get back on the USCHO.com Division I Women’s Hockey Poll rankings. 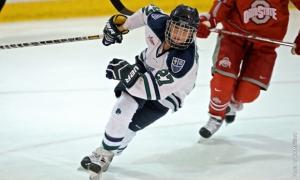 Ed Mailliard photo: Christine Bestland and Jillian Skinner received CHA players of the week awards for their performances against Minnesota-Mankota.

When asked about receiving the award, freshman Jillian Skinner said, “It is very much unexpected but a pleasant surprise. To be honest I wasn’t aware there was such an award.”
Skinner, a native of Markham, Ontario, marked two assists against Minnesota State-Mankato throughout the weekend.

Skinner received her first collegiate goal during Sept. 27 game, followed by another goal on Saturday and the only power play of the weekend.

When asked about how the team is doing so far this season, Skinner said, “Coming back with a strong second game is a good confidence builder. It is a challenge to have as many freshmen as we do but we have strong veterans and great leadership.”

Bestland, a native of Brunkild, Manitoba, who also received the award, tallied a goal and two assists for three points throughout the last weekend against the Mavericks.
On Friday, Bestland scored the first goal then turned around on Saturday and assisted the first two goals of the game.

Bestland improves to an 8 game-scoring streak with her career best of 11 was set her sophomore season, and currently leads the team with the most goals of the season so far.

“I want to develop as a reliable effective player that contributes in any way I can to team success. As a team I want us to realize our full potential and hopefully win a National Championship,” Skinner said.

The Lakers were recently ranked 10 in the latest USA Hockey Magazine Division I Women’s Hockey Poll on Tuesday. The ranking marks the third straight week in the top 10.
The Lakers will travel to Providence, R.I., to play against the Providence College Friars this Friday and Saturday. The puck is set to drop at 2 p.m on Friday and 1 p.m. on Saturday.