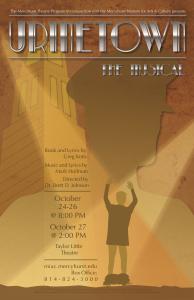 Taylor Little Theatre will soon be home to a musical, the variety of which hasn’t been seen at Mercyhurst in years, if ever. Urinetown: The Musical, a satire on musicals, opens on Thursday, Oct. 24, and runs until Sunday, Oct. 27.

The curtain opens on a desolate scene at Public Amenity #9, which is the most disgusting, grimy toilet in the city. In this not-too-bright future, the world has gone through a horrible 20-year drought.

Water has become so scarce that the citizens of this dismal society are forced to pay taxes, the likes of which would seem ridiculous to you and me.

The people of this city are forced to pay a fee to pee. Private toilets have been completely outlawed, and “public amenities” have been set up throughout the city by Urine Good Company to regulate water usage.

You may think it’d be easy to escape this charge – simply take care of “business” in the bushes, right?

Along with these ever-rising fees, the law strictly punishes those who try to pee for free. The law reigns supreme.

Disobey the law and you’d find yourself on the long journey to the omnipresent “Urinetown.”

A population continually battered by outrageous fee-hikes, has had enough of Mr. Cladwell’s (Adjunct Faculty member James Bobick) regulations. Out of the masses, a hero emerges by the name of Bobby Strong (senior Chris Gaertner).

Strong leads the rebel poor to seize Public Amenity #9 and, subsequently, declares a war on urination.

What follows can best be described as both absurd and thought-provoking. The rebel poor are met by Cladwell’s cronies, Officers Lockstock (senior Mat Anderson) and Barrel (freshman Mariesa Robinson) and the omnipresent, crushing force of the law.

The music of “Urinetown: The Musical” seems to be juxtaposed against the stark, dream-crushing plot line with huge chorus dance numbers and upbeat tempos.

This comedy is facilitated by songs such as “Privilege to Pee” and “Run, Freedom, Run!”

When asked about his experience with “Urinetown: The Musical,” senior Chris Gaertner said “working with the cast and production staff of Urinetown has been such a rewarding experience”.

“Every cast member and staff member brings something unique to the production and the dedication that everyone has to the show is something that is very rarely found in the theater industry.”

Directed by Ph.D. Brett Johnson, Associate Professor of English, the audience can expect the same quality in all aspects of production that was found in last spring’s “Eurydice,” which yielded multiple Irene Ryan award nominees.

Freshman Bethany Sulecki said “I have never worked with a director of such caliber and he creates such a positive atmosphere! I love coming to rehearsal because of those reasons, and I enjoy the creative visions he has,” when asked about her experiences with Johnson.

This production is sure to excite audiences from the usual, avid theater-goer to those just becoming acquainted with theatre.

With both an extremely well-written libretto and Johnson’s ability to create genuinely humorous staging, this production is high-energy fun from beginning to end.

Ticket information can be found at miac.mercyhurst.edu or by calling the D’Angelo Performing Arts Center box office at 824-3000.