Junior Gaelin Carrig led the Lakers as she finished her match at third overall by shooting a 78 and 80 in her two rounds.

This combined score of 158 was her best mark of the season. She believes the best thing for her was to just calm the nerves that makes the sport of golf rather difficult.

“As the seasons have gone on, I have become more and more comfortable in tournament play. I have learned that to score well, you have to have fun and you cannot be nervous, but rather excited,” Carrig said.

The tough part for the ladies as they compete is the pressure to perform well on the second day of competition as much as the first.

“Going into the second day, I told myself to have fun, and that’s what I did. The outcome was just a bonus, in what turned out to be a wonderful weekend,” Carrig said.

Overall, the entire team was proud of the fourth place finish and the success of other young players that stepped it up by receiving season-best scores too.

“I am very proud to be a part of this team. We all worked very hard in preparation for this tournament, and I think that this hard work was shown with our overall finish, and the many top 20 individual finishes.” 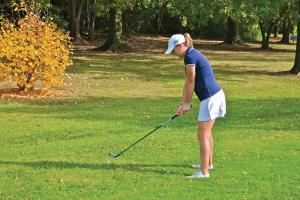 Salina Bowe photo: Junior Gaelin Carrig led the Lakers as she finished her match at third overall by shooting 78 and 80 in her two rounds.

“This tournament in particular demonstrated just how close we are to being one of the top teams in the conference,” Carrig said. Several younger players also stepped it up a notch on the weekend by receiving some season-best scores too.

“Many girls on the team had their best scores of the season in this tournament and I think that’s all that coaches could ask for. We had continuous improvement throughout our seven tournaments and that is something very impressive for any team,” Carrig said.

Not only did Carrig earn the best finish for the Lakers but she also won the PSAC Champion Scholar Athlete Award that rewards her efforts on the course and in the classroom. She has the highest GPA out of everyone that participated at the event.

“School work has been important in my life, so I always make sure that I am balancing my time between golf and school work equally…seeing the results of hard work, in both golf and school, are what keep me coming back.”