Bosco, the cat, had been living in the department for the past 10 years. He had come to the department as a stray. Mia Bruno, former Executive Assistant to Mercyhurst Archaeological Institute and a Mercyhurst alum, had previously brought in other strays, but Bosco was different. He was never adopted and soon Mercyhurst became his permanent home.

After a while, he became one of the most well known personalities in the archaeology department. 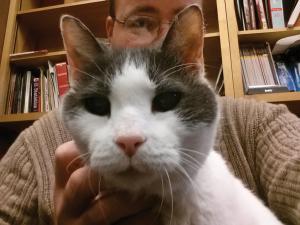 Jeff Illingworth photo: Bosco the cat will be remembered dearly by the archaeology department, including owner Jeff Illingworth, depicted in this photo.

Jeff Illingworth, the Director of Curation and Conservation in the archaeology department, was Bosco’s caretaker. For the first seven years that Bosco was here he lived in the Processing Lab and the main office before moving to Jeff’s office where he lived for the rest of his life.

“Bosco was generally popular and well known. I had people coming to my office in the last few days who I’ve never met,” said Illingworth.

It is quite evident that Bosco will be missed throughout the Mercyhurst community. A sign outside Illingworth’s door and Bosco’s former home read, “Thank you, all of you, for being Bosco’s friends.”

Students have been expressing their sadness. Some stating how weird it is being in the archaeology department hallway without seeing him.

“The most depressing part is all the left over cat food,” junior biology major Justin Stewart said.

Even with all the sadness surrounding his passing, it’s best to remember Bosco as he had been, an old man cat, lounging around on the couches and watching everyone as they passed, waiting for someone to come pet him.